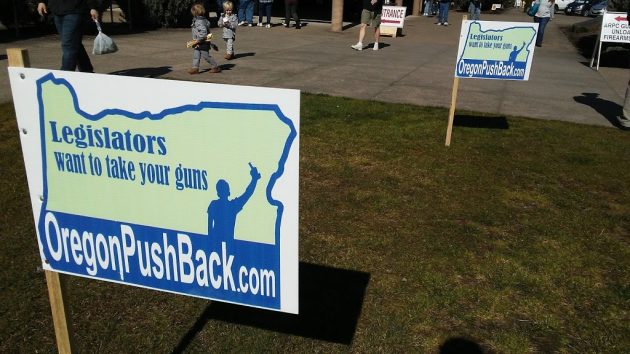 Signs outside the gun show at the Linn County Expo Center on Saturday.

This weekend’s gun show in Albany was held while a dozen bills pending in the legislature would add to Oregon’s restrictions on the ownership and legal use of firearms. Outside the show, OregonPushBack called attention to the bills. On its website, the group vows that “We Will Not Comply.” That would be easier said than done.

The most drastic of the anti-gun bills is SB 501. Most of its provisions would affect companies selling guns and ammunition. Among other things, they could not sell a gun without seeing the buyer’s permit to buy one. They could not sell anyone more than 20 rounds of ammunition per month, and only after a criminal background check.

You can assume that if the bill passes, gun stores will comply. They’d be out of business if they didn’t and got caught.

Individual gun owners would be put in a jam mainly by the bill’s prohibition of ammunition magazines holding more than five rounds, which covers pretty much all magazines for semiautomatic weapons. The bill would give owners 180 days to get rid of the illegal magazines. They could sell them out of state, hand them to the police, or destroy them. They could also permanently alter them, but it’s doubtful that the average owner has the skills or equipment to accomplish this.

The ban on common magazines would make the guns themselves useless — except, of course, in the hands of criminals who ignore that law like they ignore others. The question raised by SB 501, then, is whether previously lawful Oregon gun owners would risk misdemeanor convictions and one-year jail terms by keeping magazines they could never legitimately use, at the range or anywhere else.

SB 501 is pending in the Senate Judiciary Committee, and as of March 2 no hearings were scheduled. We will see whether the bill stays buried or whether, by moving it, our legislators are willing to put citizens in a very difficult spot. (hh) 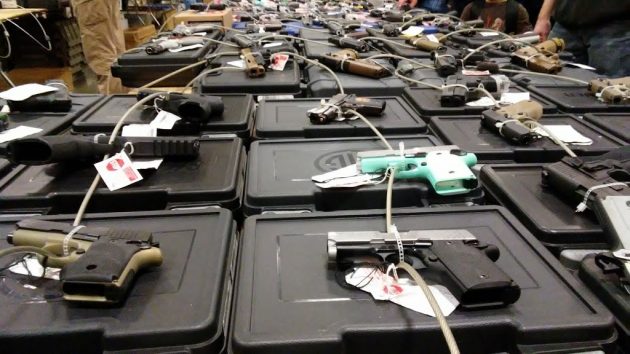 The magazine restriction would make useless guns like these, on display in Albany Saturday.