Greens on how to kill good jobs 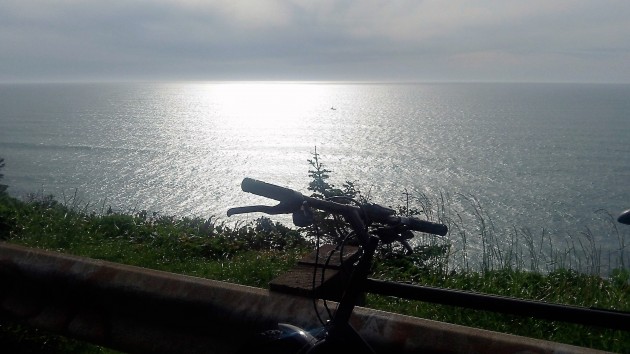 On the bike at Cape Perpetua: Aren’t we green enough yet?

A Facebook posting called my attention to an April 23 workshop at Oregon State that sounds to me as though it should be titled “How to screw working people out of good jobs.” Or maybe “Turning back the clock: Who needs civilization anyway?”

Instead, the organizers under the auspices of the College of Liberal Arts are calling it: “The Thin Green Line: Creative Resistance to Fossil Fuel Development in the Pacific Northwest.” A graphic on the workshop’s poster shows Oregon, Washington and British Columbia standing between the Canadian tar sands, the Bakken oil fields and the Powder River coal deposits on one side and, on the other, the routes by which those energy riches might be exported.

We’ve seen this green line working for some time. One export proposal after another has been killed or slowed down until it died. Loading terminals on the coast and on the Columbia, natural gas pipelines from the interior to coastal ports, and even coal and oil trains have come under environmental fire.

Sample titles of the workshop sessions at the LaSells Stewart Center: “Introduction to civil disobedience: Joining the global movement to keep fossil fuels in the ground;” “Creative disruptions: On pipelines, puppets and inspiring even your cynical neighbor.” (I think that’s me.) There are speakers, too. One will talk on “The necessity of climate disobedience.”

I looked in vain for a symposium on “How to make steel without burning coal.” There’s no panel on “Ten ways to pass the time while your E-car recharges on a long trip.” And nothing on “After fossils: Saying yes to nukes.”

I’m kind of wondering: When they’re laying down in front of oil trains or blocking state and federal  port permits or otherwise manning their green line, do these people ever think of their fellow citizens who, because of them, won’t be earning good money on trains or ships, or in ports, or in the oil fields and mines across the mountains? Do they ever think of all the others who won’t have jobs – in schools or hospitals or even colleges or anyplace else — because our natural resources are being shut down? (hh)

9 responses to “Greens on how to kill good jobs”