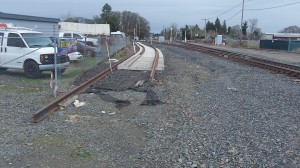 This scene has nothing at all to do with the story, except that this PNWR project seems to be “going forward.”

The other day the Pentagon press secretary was speaking of an incident in which an Iranian fighter was tailing an American spy drone over the Persian Gulf but was warned off. He said the U.S. told Iran that “we reserve the right to protect our military assets as well as our forces and will continue to do so going forward.” Going forward? What does that mean? What does it add to the sentence that is not already conveyed by the use of the word “continue”? How can you continue except from then on? Without a time machine, it would be impossible to continue into the past, right?

“Going forward” came into vogue six or seven years ago and has spread since then, along with “That having been said” and “It is what it is.” None of these phrases mean a thing. People evidently say them in order to be moving their lips while they think of something else to say. What the speakers sound like, though, is imitators of fashionable but empty phrases. Now, this is far from the worst aspect of the culture today. And it will no doubt continue until these phrases are overtaken by the next language fad. But it doesn’t hurt, I hope, to point out how silly they sound when you’ve heard them for the thousandth time. (hh)

From Ted Salmons: Actually I think the photo you posted with the story was entirely accurate. It shows the current administration’s idea of going forward, i.e. continue going down this path and you’ll soon be off the rails.  Obama just hopes to squeeze another 3+ years out of these insane policies so afterwards he can continue his mantra of “See what the Republicans did?”