Going downtown? Be aware of cameras 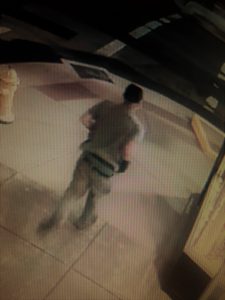 One of the two surveillance camera shots posted by the Albany police.

One of the things we’ve learned from the Case of the Downtown Tree Chopper is that downtown is under video surveillance and the cameras never sleep.

Video surveillance was a key element, apparently, in solving the April 29 vandalism, which destroyed or damaged, among other things, about a dozen newly planted trees along Lyon Street. The trees had been planted as part of the downtown streetscape upgrade.

On Thursday the Albany police said they had developed a suspect in the late-night vandalism. They said pictures of the man had been “captured on several video surveillance systems.”

Police posted two images on Facebook and maybe other social media, asking for help in identifying the man. On Friday morning, police said, Nicholas Randklev, 29, an Albany resident not otherwise identified, walked into the police headquarters and said he was the man in the pictures. He was arrested and cited to appear in Circuit Court on a charge of first-degree criminal mischief.

The Downtown Association had posted a $700 reward for information leading to a conviction. If the suspect is indeed convicted, chances are he’s not in line for the money even though he clearly was the one providing the information that clinched the case.

The main take-away, though: There’s enough video surveillance downtown so that someone walking along is likely to be caught on several cameras even — and perhaps especially — during the small hours of the night. Whatever the implications are for privacy and all that, it’s obviously a big help when there’s an occasion to investigate crime. (hh)


12 responses to “Going downtown? Be aware of cameras”