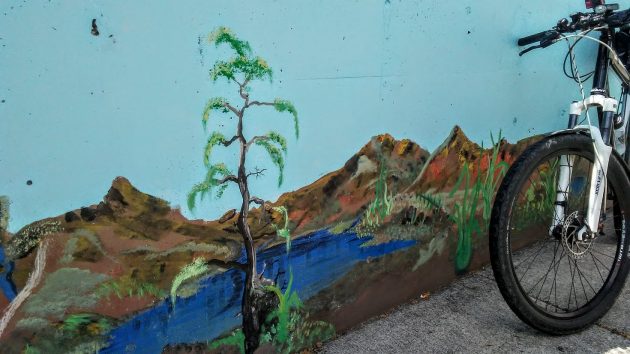 A detail in the Albany Skatepark mural, photographed on June 5.

When I reported on the remarkable new mural at the Albany Skatepark on June 1, I could not find a clue to who had painted it. Thanks to a reader’s suggestion I now have information on that point.

The mural covers the entire outside concrete wall on the north side of the skatepark and is visible from Santiam Road. It faces a parking lot that is part of the property of the ReStore of the Albany Area Habitat for Humanity.

A reader suggested that the ReStore staff might have an idea of who decorated that wall.

Turns out they did. A few days ago I stopped by the place and talked with, among others, the manager, Brenda Bradford.

They all said the mural was the work of Nate Vanek, a volunteer at the ReStore. He apparently painted the wall over a weekend about a month ago. He wasn’t at the store when I stopped by, and I left word for him to get in touch if he felt like it.

The mural artist clearly is the creative type. Bradford told me it was Vanek who had built the whimsical stick sculptures that showed up in Bowman Park one day last October. I checked them out at the time, and the result was this.

Also, I was told, he created the equally smile-inducing wooden dog that decorated the path around Waverly Lake in early March this year.

As for the skatepark mural, it covers a wall that was often marred by graffiti. And as soon as they were painted over, new ones would appear. But since the mural was done, taggers have left that wall alone.

So, whether he seeks it or not — and evidently he doesn’t — let’s give the man credit for doing a good thing and, with his stick art, making people smile. And by the way, unlike official Public Art commissioned by the local government, these creations cost the public nothing at all. (hh)


6 responses to “Giving credit for public art … and it’s free!”