Gibson Hill: Why they dug into new road 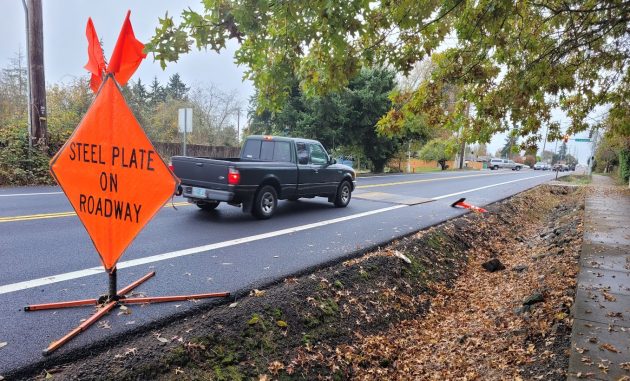 On Wednesday, a pickup slows down before crossing the steel plate on newly repaved Gibson Hill Road.

Barely two months after completing the repaving of Gibson Hill Road in North Albany, the contractor was back last week digging in the pavement. How come?

There’s a simple answer, and drivers on this road can guess what it is. Since the repaving, we frequent users of Gibson Hill have taken to slaloming around the manhole covers sunk into the new asphalt.

We try to avoid the manholes because the new pavement is just a tad too high in relation to the steel lids. This turns manhole covers into shallow potholes, and drivers like me try to avoid them.

So, what about that digging, and about the steel pipe that covers one of the spots?

I asked Gary Stockhoff, the Benton County public works director, and he passed my question on to Owen Millehrer, the engineer overseeing the Gibson Hill improvement project for the county’s public works department.

“The contractor,” Millehrer replied by email, “came back and adjusted two manholes to improve the ride of the road and repaired two water valves that were damaged. The steel plate was left to allow the concrete to strengthen before allowing traffic on it.”

This result — new pavement being higher than the existing lids on manholes — is not exactly rare.

The same thing happened on Lyon Street downtown when ODOT had the Highway 20 couplet repaved a few years ago. The city had that fixed after the state job was done.

It was also a problem on Second Avenue east of Lyon Street, and on the latest section of North Albany Road to be rebuilt. Those spots got fixed as well.

As for Gibson Hill, it is still a Benton County road but will be transferred to City of Albany jurisdiction under an agreement between the county and city.

Millehrer says the plan is to make the transfer from one jurisdiction to the other once the one-year construction warranty period has run out.

And lest I forget: After years of complaining about the worsening condition of Gibson Hill Road, this driver very much appreciates the great new pavement. It’s a huge improvement, especially at night with the reflectors set into the center line. (hh)


5 responses to “Gibson Hill: Why they dug into new road”