Gibson Hill: What is, and isn’t, happening 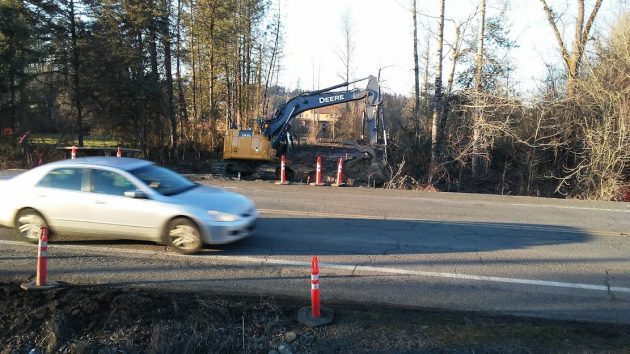 As a North Albany commuter, maybe you thought the construction on Gibson Hill had something to do with the forthcoming resurfacing of the road or even the plans for a signal at nearby Crocker Lane. If so, sorry to disappoint you.

No, all the recent digging on the north side of Gibson Hill, west of Crocker, is for the construction of the four-lot Hidden Meadow Subdivision, Phase 2, on 2.3 acres. The city planning department approved the land division and tentative plat in July 2018. The development lies between Gibson Hill and N.W. 18th Avenue to the north. Three lots will be accessed from Gibson Hill (two as flag lots) and the fourth from 18th.

Meanwhile, the city of Albany still has 2019 as the target year for construction of the long-planned traffic signal at Gibson Hill and Crocker. But Ron Irish at City Hall told me Monday: “There’s some chance that could slide if we are unable to negotiate right-of-way acquisition prior to our planned bid date.”

To build the signal and rework the T-shaped intersection, the city needs land on both the northeast and northwest corners.

Benton County also this year had planned to resurface Gibson Hill, which is cracking up in many places and was patched last year or the year before. It won’t happen.

“We have been working with the budget and figuring out what projects are currently a higher priority than others,” County Engineer Laurel Byer told me Monday. “Unfortunately for Gibson Hill, Spring Hill Drive has had a couple of rough winters and has reached a point where we have to spend money on it to put it back into shape. Especially since Spring Hill sees quite a bit more truck traffic than Gibson Hill, Public Works has decided to defer the overlay on Gibson Hill until 2021.”

When the overlay does take place, the county also plans to install sidewalks and drainage along portions of the north side of Gibson Hill.

As for Spring Hill, if the bids are in line with preliminary estimates the road will get a pavement overlay from Highway 20 to Scenic Drive (near Fir Grove). From Scenic to Independence Highway, Spring Hill will get a chip seal treatment this summer and an overlay in five years or later, according to Byer.

The upshot for Gibson Hill: Drivers will have to dodge the bumps and widening cracks for at least another couple of years. (hh)


11 responses to “Gibson Hill: What is, and isn’t, happening”