Getting tough on nuisance houses 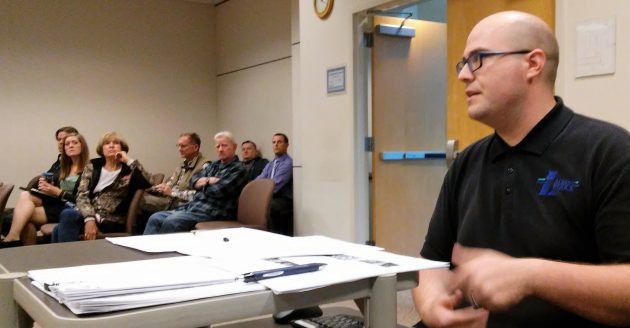 Code Compliance Officer Kris Schendel talks to the council Monday while city officials and others listen.

Albany officials have drafted a set of tougher laws to deal with the owners of properties that attract squatters, crimes including drug use, noise and trash complaints, and other kinds of problems to the neighborhoods where they are.

The city council Monday got a look at pictures of some of these places. Some had weeds so high you could barely see the structures. One yard was filled with a pile of trash and garbage that looked to be four or five feet tall. In one house with no utility service, people had apparently run out of buckets to fill and were disposing of their waste outside their trash-choked house. Some of the other structures had windows and doors broken out or kicked in.

The stories were similar but not the same. In some cases, owners had died and their grown children had neglected their place or trashed it, or used it as a drug house. In others, owners were unaware of what was happening. Some of the places were in some sort of legal limbo between probate and foreclosure. But in all the cases the council heard about, the police had had to respond to the addresses over and over, in one case hundreds of times.

Kris Schendel talked to the council about the problem. He was hired last summer as a code compliance officer in the police department. City Manager Wes Hare said the problem, one the city has had to deal with for many years, was getting worse. Neighbors of several problem sites were listening Monday. One thanked the city for its help.

The council has before it a series of code amendments and additions. All are intended, in Schendel’s words, to make people including banks accountable for what happens with properties over which they have control.

Among other changes, the proposals would allow the police chief to declare properties to be “chronic nuisances” or “derelict structures.” Owners would have a period of time, usually 30 days, to fix the nuisance. If they didn’t, they would face penalties of $250 a day until they did. Or if there were more police calls while the nuisance continued, the fines would jump to $500 per incident. The city could also ask the circuit court to order a nuisance property closed, which can be done now with houses used for “specified crimes,” namely prostitution, gambling and illegal drugs.

A derelict structure would have to be registered as such with the police, and a plan to make repairs would be required and then be checked for progress. If no progress was made, the city could order the house to be fixed and the costs assessed against the owner. In extreme cases, the city can already demolish a house, which it did last year with two addresses on Jefferson Court S.E. But the point of the proposed laws is to force improvements before demolition becomes the end result.

The package of changes includes one that would allow the city to order grass to be cut if it gets over a certain length any time of the year, not just during fire season. The staff suggested 12 inches as the cutoff, but the council wants 10 inches.

Action on all the changes is expected at the council’s regular session on Nov. 9. (hh)


7 responses to “Getting tough on nuisance houses”