Getting rid of E-waste: Here’s a little story 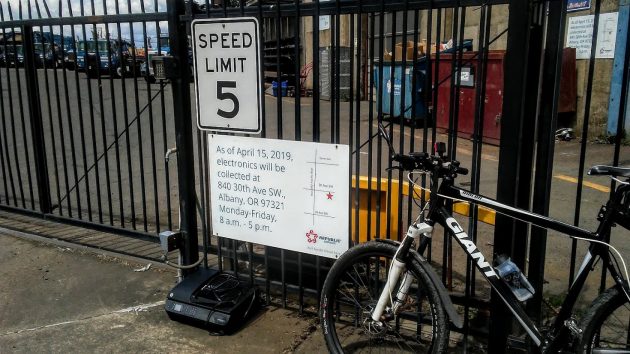 On Saturday, what looks like a discarded printer lies outside the Republic Services yard on Montgomery Street S.E. where E-waste used to be accepted but hasn’t been for two years.

Yes, you CAN hand in electronic trash for recycling in Albany even on weekends when Republic Services is closed. That’s what the DEQ tells us online.

Here’s the story that leads to this point.

A few weeks ago I wanted to get rid of a printer that had given up the ghost, assuming that computer printers have ghosts to give up. (They  must, for often they seem to have a will of their own.)

It had been some years since I had dropped off old TVs and similar junk at Republic Services’ E-waste recycling station on S.E. Montgomery Street. I checked online to see if it was still there and, on Republic’s website, got this message: “Electronics recycling services are not available in your area at this time.”

OK then, I said to myself, and the printer went into the trash. (I didn’t know then that that’s a no-no.)

On Saturday a bike ride took me past the place where I used to drop stuff like that. The photo at the top is the result. As the sign says, that place has been closed to E-waste recycling for two years. It points to a new Republic Services location, on 30th Avenue just east of Pacific, where E-waste is accepted, but only 8 to 5 on weekdays.

On Sunday I took a look and, sure enough, the place is behind a closed gate. 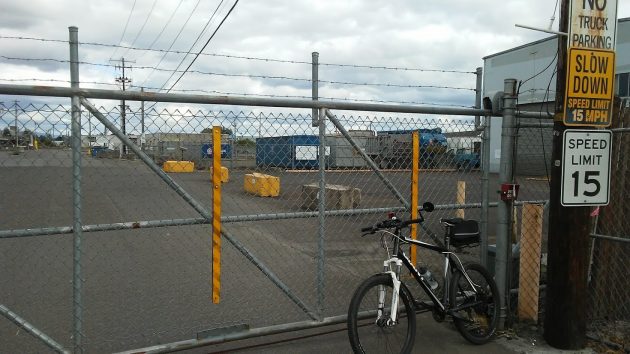 The gate, closed on Sunday, leads to Oregon Freeze Dry and the Republic Services E-waste recycling place when it’s open.

But people who work regular hours during the week and want to do their cleanup and disposal chores on weekends have other options, as I learned on the E-waste recycling website of the Oregon Department of Environmental Quality.

The site reminds us that, passed by the legislature in 2007, “Oregon E-Cycles is a statewide program, financed by manufacturers, that provides responsible recycling of computers, monitors, printers, TVs and computer peripherals. Anyone may recycle seven or fewer of those electronic devices at one time at no charge at participating collection sites.​”

And as for collection sites, the DEQ lists two in Albany in addition to Republic Services. These are Goodwill and St. Vincent de Paul, both on Pacific Boulevard S.E. And both, the DEQ tells us, are open seven days a week including, obviously, Saturday and Sunday.

No more excuse to put electronic waste in the trash. (hh)


3 responses to “Getting rid of E-waste: Here’s a little story”