Get to know my smart meter? Why?

The Pacific Power smart meter when it was installed back in March.

Pacific Power is asking us all to “get to know your new smart meter.” I don’t know about you, but as for me, that’s one complication I didn’t ask for and don’t need.

The utility sent a postcard reminding us that the smart meter was installed in the spring. “Now it’s time to see what it can do!” the card says.

To do that, you first have to sign in to an online account, and if you don’t have one, you have to create one. I started, but then I stopped.

The online form asks for a user name. It has to have so many characters and at least one number. I’ve filled out such forms for several online accounts, and each one asked for a user name. I can remember two or three of my user names, but the others I forgot as soon as I made them up. I don’t see the point of creating yet another one that I then can’t remember.

I haven’t paid attention to our electric meters for as long as I’ve lived. Correction: When I was a teenager and we lived in a fifth-floor walkup, the meter was outside the front door, and to make sure I had turned everything off when I went out, I used to glance at the meter to see that the little wheel had stopped.

In any case, if this new meter is as smart as they say, it does not need me checking on it to see what it’s doing or indeed that it’s doing its job. (hh) 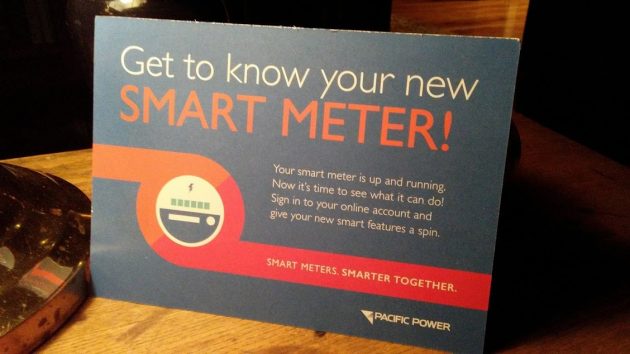 The postcard from Pacific Power arrived on Monday.