From Kmart to WinCo: Numbers 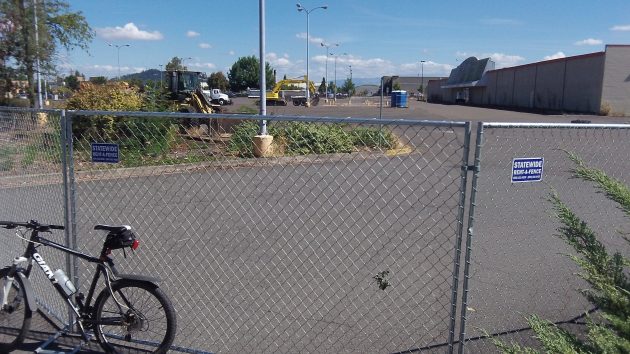 On Labor Day the Kmart site was fenced but quiet. The walls started coming down two days later.

As you might expect, replacing the abandoned Kmart department store in Albany with a WinCo supermarket involves a lot of numbers including substantial dollar amounts. Let’s take a look at a few.

On its building permit, the city of Albany values the construction of the new supermarket at $7.5 million. That’s based on size, which at 86,600 square feet is only slightly larger than Kmart’s 85,350. Actual construction costs typically run higher than what’s listed on the permit based on the size formula, says Albany Building Official Gary Stutzman.

WinCo’s contractor DTL Builders of Riverton, Utah, got the demolition permit in July. Dori Bergdorf, who with her husband, Jeff, founded the company in 2008, is quoted on the website of US Builders Review that it has completed 33 projects for WinCo and typically hires local subcontractors for part or much of the work.

For the review of its site plan, applicant WinCo Foods LLC, of Boise, Idaho, paid the city an application fee of $16,586. When it applied for a building permit, the price went up. Fees listed in the building permit total about $828,700. Street system development charges account for most of that, or more than $681,300. The reason is that the supermarket expects to generate substantially more traffic than Kmart did.

Based on the store’s size, WinCo’s traffic study estimates it will generate 5,594 trips per day on the city’s street system, including 714 during the peak hour (which in Albany is between 4:40 and 5:30 p.m.), or 289 more peak-hour trips than Kmart. (The numbers include trips in and out and are based on the different types of the respective stores.)

The parking lot, which will be resurfaced and equipped with new lights, has more than 60,000 square feet. During Kmart days and since, it was rarely full. The traffic study suggests that when the new store opens next year, the lot will be busier than before. (hh)


6 responses to “From Kmart to WinCo: Numbers”