Freeway planning: Slow is the word 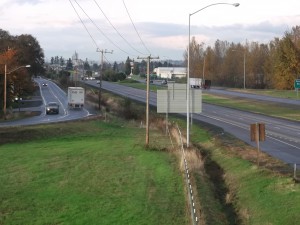 I-5 at Santiam Highway: What’s taking so long?

For two or three years now, the Oregon transportation department has been preparing for an environmental assessment of plans to widen Interstate 5 from Highway 20 in Albany to the Jefferson exit. The process is an example of how the agency, following its own and federal regulations on big projects, wastes both time and money.

Yes, all the angles have to be considered, especially how to configure interchanges and how best to route traffic to and fro. But why does it have to take months and even years to make up drawings or incorporate public comments and engineering recommendations?

This particular project may cost roughly $500 million, ballpark. It’s too big to be funded and built all at once, if it ever is. So ODOT will have to keep updating its plans, lest they get stale and no longer reflect the latest thinking. Now the agency plans to ask for more planning money, according to a report to the Albany council.

To speed things along, Albany agreed to chip in $200,000 — from where the council did not say. The council hopes that this results in the next round of funding paying not just for more studies but for actually getting something done, like acquiring property for a long-awaited southbound on-ramp to I-5 at Knox Butte Road. These freeway improvements should have been made years ago.

The planning process has taken far too long. The money spent on more studies should be used to start putting pavement on the ground instead. (hh)

Comment from Albany Councilman Ray Kopczynski: “To speed things along, Albany agreed to chip in $200,000 — from where the council did not say.” True — because that info was offered by (city transportation analyst) Ron Irish:  Two different line items in the existing budget @ $100K/ea for planning will be used — so no additional funds will need to be spent.