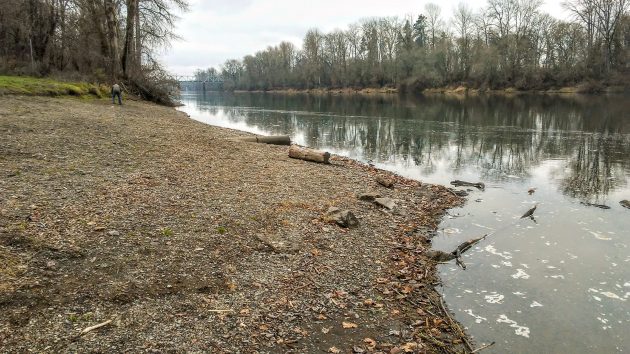 The Willamette River has been running very low, a level normally seen only during late summer. But according to the Weather Service that’s about to change in a big way.

A bike ride in the darkening gloom of a December afternoon took me through Bowman Park on Monday. There, the gravel beach upstream of the boat ramp (photo above) looked as wide as I had seen it in a long time. But if you want to take a stroll there without getting your feet wet, as the guy in the far background was doing, you don’t have much time to get it done.

That’s according to the Weather Service, whose online hydrograph for the Willamette at Albany forecasts an 8-foot jump in the river level by Saturday night.

For the past few weeks, the level at the Albany gauge has been hovering around 2½ feet. At 2:26 p.m. Monday it had inched up to 2.6 feet, and the forecast says it will keep rising slowly until Thursday morning.

But then, the river level is forecast to go up steeply late Thursday and Friday, and it won’t level off until it reaches 11.12 feet at about 5 on Saturday night,

As you might guess, the reason for this big jump in the river’s flow is rain. At least that’s the way it looks on the five-day forecast available late Monday. The Weather Service believes it will start raining Tuesday and Wednesday, with a 90 percent chance of rain Wednesday night turning to 100 percent on Thursday.

For the days after that, it’s supposed to be just showers, but apparently the predicted rain storm late Thursday is forecast to be enough to fill the river to a level that’s more normal for this time of year.

Good thing I got a ride in Monday while the weather was mostly dry. (hh) 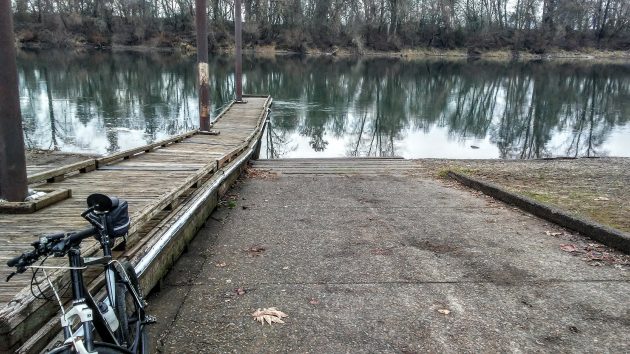 7 responses to “Forecast: Big jump in level of Willamette”