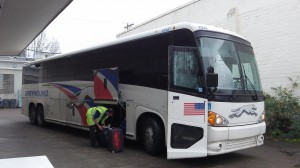 At the Greyhound depot in Corvallis. Albany has not had one since August 2004.

The point today: Better interstate bus service for Albany. According to what I read in the paper, the Albany police on Saturday, Dec. 29, gave a woman a ride to Corvallis so she could buy a bus ticket. She was described as a social worker on crutches, from California, and she was on her way back home after Christmas when, for some reason, an Amtrak conductor called the cops to remove her from the train at Albany Station.

The police were kind enough to take her to Corvallis so she could get a hotel room and buy a bus ticket to continue her trip the following day. She could not do that from Albany. You may remember that Greyhound dropped Albany, along with some 30 other Oregon towns, from its schedule in August 2004. But its buses still run past Albany on their way up and down I-5.

In 2004 the company had a compelling reason for its decision to reduce service: It was not getting enough passengers. So it bypassed Albany but continued its service at Corvallis, where it has a regular depot and students at Oregon State University provide a steadier flow of riders.

Since then, though, Albany has completed its transit center at Albany Station. It ought to be time for the city to make another attempt to have Greyhound add the station as a regular stop where tickets are on sale. Now that the city staffs the transit center during working hours, could it not contract with the bus line to provide that ticket service?

Eight years ago, one of the likely reasons why the stop was discontinued was competition from the state-supported “Throughway” bus service that supplements the Amtrak train schedule. The state ought to take another look at this situation to see if cooperation with Greyhound — instead of competition with it — can be achieved. (hh)