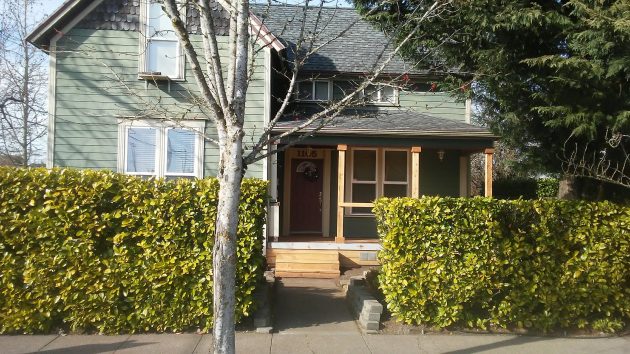 The front porch of 1105 First Ave. N.E. on Thursday afternoon. It’s a work in progress.

Just to finish a little story about Albany’s historic preservation efforts that appeared here on Feb. 24: Yes, the replacement of railings on the house at 1105 First Ave. N.E. has, as expected, received the city’s OK.

The Albany Landmarks Commission held a public hearing on the railing replacement on Wednesday night. And once it heard the staff report and saw some pictures, the group quickly and unanimously said fine, go ahead.

The house dates from the 1890s and is used as a rental. It has two entrances, each with steps leading up to them. The  hand rails on the steps and front porch were installed in the 1980s and recently found to be in need of replacement. They’ve already been taken down. The owner wanted to replace the railings with the kind that old photos showed had been there when the house was built.

Seemed like a great idea from the standpoint of restoring the historic looks, just what the city wants. So why a hearing? Because, planning manager David Martineau kindly explained, the changes in appearance would be visible from the public right of way and thus a hearing before Landmarks had to be held. (Changes not visible from the right of way could be decided by the staff.)

Still seems a bit of needless bureaucracy over such a minor and sensible request — to replace railings that didn’t match the original style of the house with railings that do. A quick staff review should suffice to approve such requests even if visible from the street. But the Landmarks Commission members apparently don’t mind spending their volunteer time on this stuff. (hh) 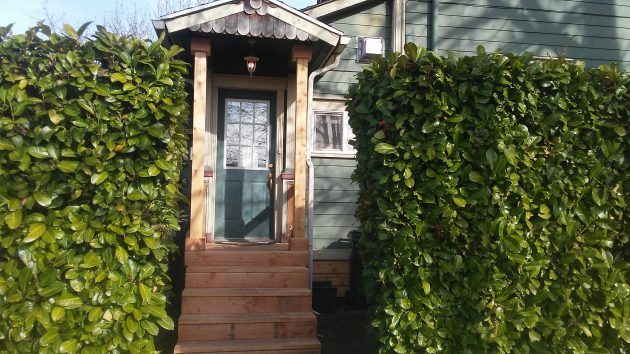 This is the side door with steps, facing Main Street. 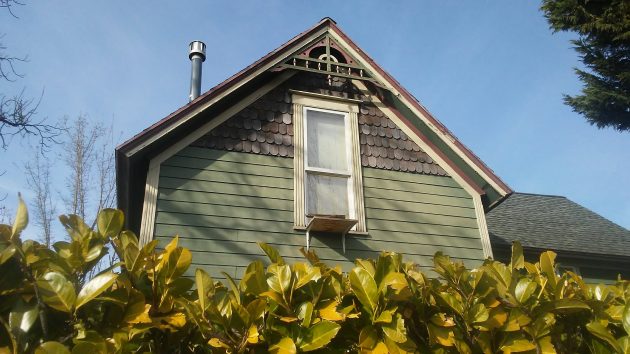 The house, at First and Main, has a neat old gable decoration.