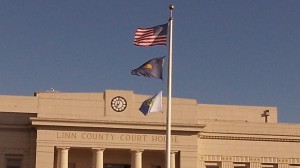 May the flag remain an inspiration always.

The Oregon House on Thursday was scheduled to vote on flags in schools, which was unnecessary because we already have a perfectly adequate law on that subject.

The law now calls for schools to have U.S. flags in every classroom and make time for students to say the pledge of allegiance once a week. House Bill 3014, as amended by the Senate, makes clear that this goes for public charter schools as well, which it probably already did. As first introduced, the bill would have required flag salutes every day, but the Senate changed it.

It’s worth remembering that the flag salute is not a truly historic part of American life. The founders might well have been aghast at the notion of free citizens — young or old — standing up and saluting the flag in unison with a government-composed text.

It was not until World War II, in 1942, that Congress adopted the pledge of allegiance to the flag. A year later, at the height of the war, the Supreme Court said children could not be compelled to recite it. And it wasn’t until 1954 that Congress added the phrase “under God” to the pledge.

As a symbol of our history and freedom and of national cohesion, the flag deserves all the respect we can give it. Watching it fluttering in the wind is always an inspiration. So let us guard against laws that lessen its meaning by making saluting the flag nothing more than a daily routine. (hh)