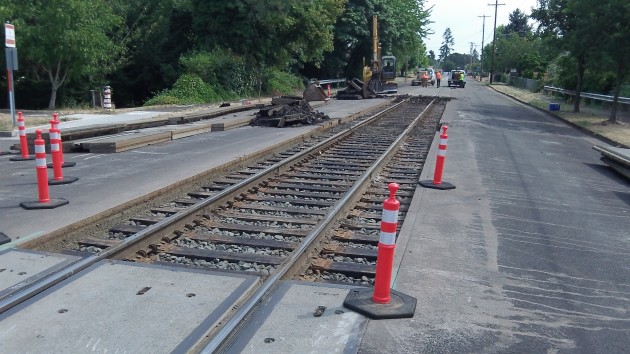 If you drive along Albany’s riverfront, you will have noticed that work began today on the second phase of rebuilding Water Avenue and the railroad track in the middle of it. 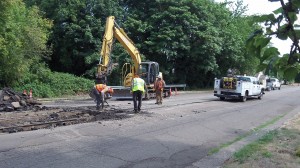 Four blocks of the street, from Main Street to Harrison, were done last summer. This morning a contractor for the Portland & Western Railroad (PNWR) got started lifting sections of concrete that cover the cross tries and ballast on the remaining three blocks from Harrison Street to Geary. Once the railroad is done straightening the rails, a contractor for the city of Albany will replace the paving on the traffic lanes and repair the sidewalk.

Salem Road & Driveway submitted the lowest of five bids for the paving job at $115,235 and was awarded the contract. Chris Cerklewski, project manager for the city, says the whole thing should be finished by the middle of September. Drivers in the neighborhood — and cyclists whose routes include that stretch — are looking forward to a smoother ride.

The section of the street with the railroad down the middle had been in poor shape for years, but repairs had to wait until the city and the PNWR, along with the track’s owner, the BNSF, concluded a new franchise agreement last year.

Meanwhile, the Portland & Western also wants to do some repairs on the track and the crossing at Monteith Riverpark and the Albany Senior Center. Ron Irish, the city transportation system analyst, says the work will likely close the crossing for a day or two, “and Staci Belcastro of our office is working with them to try and pick a time slot that minimizes scheduling problems for the senior center and the park.”

The track is part of the old Oregon Electric line that ran from Portland through Salem and Albany to Eugene. (hh)