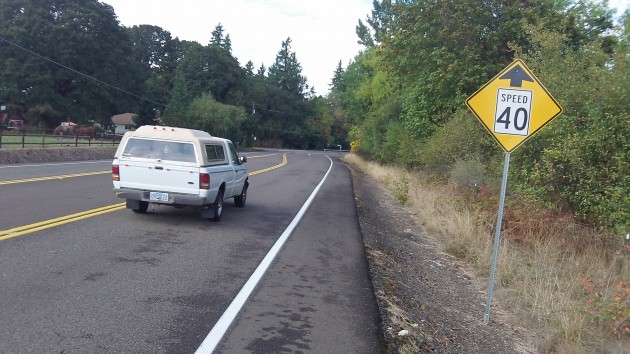 First, there’s this warning about a speed-zone change coming up.

The district attorney’s evaluation of the Feb. 17 car crash that killed an Albany bicyclist made it sound as though speeding around that corner on Oakville Road was routine. If it is, it’s in spite of the signs on the road.

The evaluation by a Lane County assistant DA (see the preceding story) has a section headed “traffic conditions (standard of care of reasonable person/community standard).” It says a sheriff’s detective “indicated” that during the crash investigation on Feb 17, “vehicles were traveling faster than 45 miles per hour, and even had to go into the oncoming lane to stop from hitting the cars already stopped due to the investigation.” And again on May 19, during an on-scene review of roadway evidence, even with police present, “traffic continued to come around the corner very fast.”

It’s not clear what that had to do with anything. In the actual crash, the crucial factors seemed to be that the 24-year-old driver said she had her car on cruise control set at 60 mph and found herself unable, perhaps because of a mechanical malfunction, to turn it off or to activate the brakes. The report does not go into why anyone would use cruise control on a county road with many residential and farm driveways, let alone set it at 5 mph above the speed limit.

In any case, Oakville Road is amply marked to warn drivers to reduce speed well ahead of the right-hand corner near the Albany city limits where the road becomes Queen Avenue. First there’s the warning that a 40 mph zone is coming up. Then, well ahead of the curve, there’s an advisory sign suggesting 30 mph as a safe speed around the turn. We’ve all learned that those advisory signs often understate the safe speed by about 10 mph. Maybe that’s why most drivers take that corner faster, as the report says. But they don’t crash. (hh) 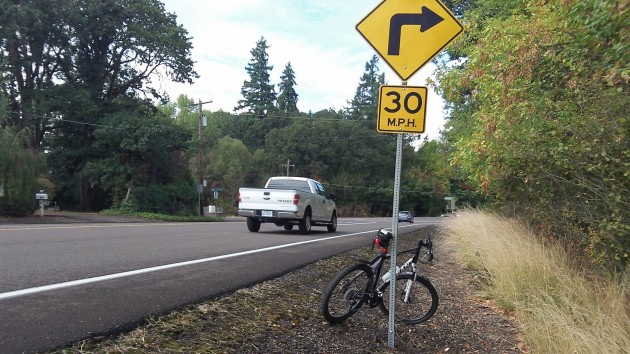 And then there’s this additional advice well ahead of the curve itself.