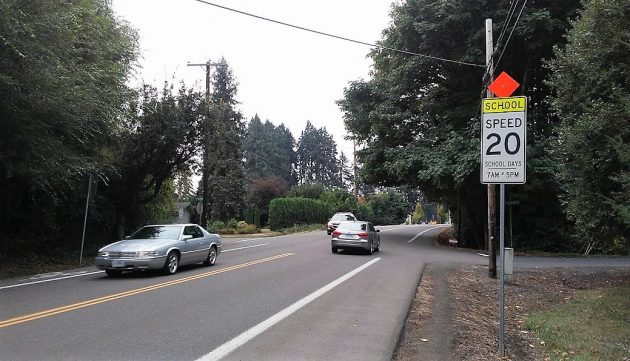 The view on Spring Hill Drive, looking south in the direction of Fairmount School at mid-morning Monday.

Children generally don’t walk to Fairmount School on Spring Hill Drive in North Albany, so why is there a 20 mph school speed zone? Because now and then, one of them might run.

What prompted this story is a question from a reader who lives in one of the neighborhoods nearby: “I and others are wondering why there is a 20 mph posting on Spring Hill for a school zone when children don’t have classes there. My calls to the school board tell me that it is used for troubled children and they are bused and do not walk to any class they attend there. If they are worried about slowing traffic on Spring Hill, then why not a sign that says 20 mph when children are present? This would allow traffic to flow and not cause the congestion and slowdowns it now does.”

Fairmount has not been a regular elementary school for several years. For a time it was used mainly as offices, and the school speed zone was removed. But in September 2016, Albany school officials asked Benton County to reinstate the speed restriction after a “behavior intervention center” for elementary-age children was moved to the building. (In addition, the site is populated by children at a “family relief nursery” and an early-intervention program, and it is true that all of them are bused or otherwise driven to and fro.)

Benton County Engineer Laurel Byer recalls: “One of the concerns stated by staff was the potential that some of the special-needs students may dart out into traffic, evidently a real possibility, and therefore there was a desire to post the school zone for lower speeds.”

On school days, when the speed zone is in effect, the behavior center at Fairmount has up to eight children each in the morning and afternoon. They are there because because they may act out. Once, as witnessed by the staff member who told me about this, one of them did a runner and got as far as the roadside before being restrained.

That explains why the speed zone was reimposed. As for the old “when children are present” speed restriction, that’s no longer in general use at school buildings. But according to state law, it still does does apply at crosswalks school children use. (hh)