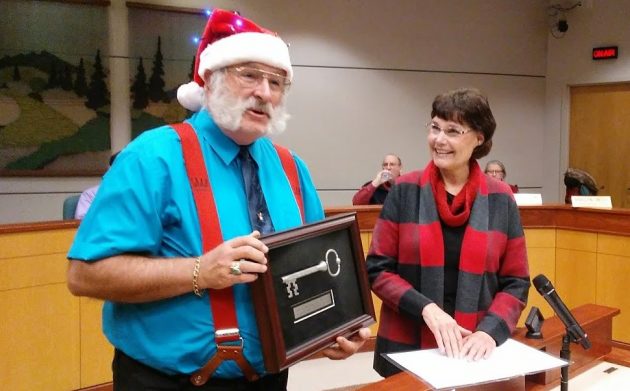 Attending his last regular meeting after seven-and-a-half years on the city council, Ray Kopczynski Wednesday was thanked — and praised — by Mayor Sharon Konopa.

The conditions for allowing detached accessory dwelling units — essentially little houses in backyards — continue to divide Mayor Sharon Konopa from four members of the city council. They’ll try for a compromise in January, but what shape that will take no one knows.

Like other local governments, Albany is supposed to fall in line with a legislative mandate to allow detached or attached accessory dwelling on any lot zoned for single residences. The current city code falls short, and a code amendment to fix this was vetoed by the mayor. Two council members, Bill Coburn and Dick Olsen, support her in this.

Councilors Bessie Johnson, Rich Kellum, Ray Kopczynski, and Mike Sykes have twice voted for the code fix, but it takes five to overcome the veto. The disagreement continued Wednesday, and at times it got a little pointed. Listen to the exchange if you want when the video is posted, probably Thursday, on the council page at cityofalbany.net.

The mayor maintains she is protecting Albany neighborhoods from becoming multi-family districts. She objects to provisions that would raise the maximum size of ADUs from 750 to 900 square feet,  require no additional off-street parking, and drop the requirement that one of the units on a lot be occupied by the owner.

Konopa said she’s heard from lots of people against ADUs and she’s looking out for people living in their neighborhoods. “And we’re not?” Johnson shot back.

To an observer — like me — the whole thing seems like an unnecessary dispute because, among other things, it can’t be cheap to build another house in your yard; so there’s not likely to be a rush to build ADUs; there’s still a permit process and various setback and other restrictions apply; and once a unit is built there’s no way for the city to enforce any owner-occupancy rules.

Besides having the support of four council members, the amendments rejected by the mayor also had twice been recommended by the planning commission. As for finding a way out, Kellum told the mayor, “This is now on you.” (hh)