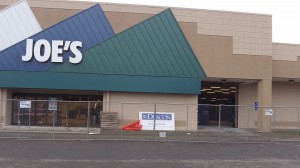 The front of the store being remodeled.

At least one of Albany’s large vacant retail spaces appears to have found a new future tenant. A construction fence has gone up outside the former GI Joe’s on Southeast 14th Avenue, and workers are busy inside. One of them says they’re building an inside wall to divide the huge space.

This is borne out by building permit records on file at City Hall for an estimated $750,000 worth of alterations and repairs at the former sporting goods palace at 2000 14th Ave. S.E. The permit says the work is for “tenant improvements for Marshalls including ADA (accessible to the disabled) washrooms, sales area, offices and storage area.”

Marshalls is a discount department store that also operates under the T.J. Maxx label. The nearest Marshalls is in Salem, while T.J. Maxx has a store in Corvallis.

Records at the building division say the contractor, S.D. Deacon of Portland, is redoing 23,000 square feet of the 65,000-square-foot store, with the rest being left unfinished for a “future Big Lots.” The building, by the way is owned by Yee Hop Realty in Honolulu.

The city’s permit fee for this part of the work was $8,644. It does not cover electrical work, for which a separate permit will be issued later. No word on when the new store will open, or when the remaining half of the building will be occupied again. (hh)