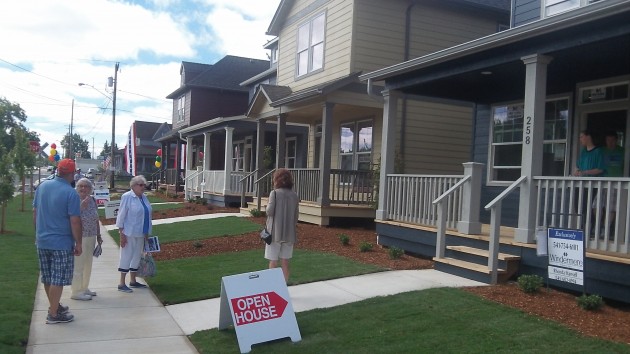 After checking out the interior of the first units in Edgewater Village over the weekend, I’m encouraged about the prospects of this, Albany’s biggest investment yet in reviving a blighted part of the old downtown.

The houses were open to the public Saturday and Sunday. Priced from nearly $256,000 for the smallest, at 1,546 square feet, they appear to me to be attractive to people looking for comfortable living in well arranged and appointed spaces without a lot of yard work and within walking distance to restaurants in the old part of town. Or at least biking distance.

Five houses have been all but finished, and two of them had signs saying “sale pending.” One of those will serve as the sales office unless someone else wants to buy it, in which case the developer, George N. Diamond, told me he’ll move the office into it. Diamond spent part of Saturday watering the young trees he had planted on the path between the development and the Willamette Community Garden.

The completed units are the first of 19 shown in the plans for Edgewater’s Tract A. I asked Diamond about building more units, especially along the river, and he told me he’s getting bids on construction. The plans show units 6 through 13 to be similar to the first five. But units 14 through 19, facing the Willamette River across the Dave Clark Path, will be bigger.

In a public-private partnership to get this multimillion-dollar project launched, the Central Albany Revitalization Area invested $2.4 million in the development, starting with the cleanup of the site after the former packing plant there burned down in 2006. The money was in the form of a loan that is forgiven in stages, at the rate of $40,000 per house, as phases of the development are completed by certain deadlines. The first, for five houses, is the end of this month. The others are for at least an additional 10 units by Aug.30, 2016; an additional 10 by Aug. 30, 2017; and the final 35 by Aug. 30, 2018. (The details about the deadlines were added to the original version of this story on Aug. 12.)

The weekend open house generated a fair amount of traffic and interest, as near as I could tell. By about 11 a.m. Saturday, Diamond estimated some 40 people had taken a look. On a return visit Sunday afternoon, we encountered a couple talking to real estate agent Bill Stansell in one unit, and two other people inspecting the house two doors down. (hh) 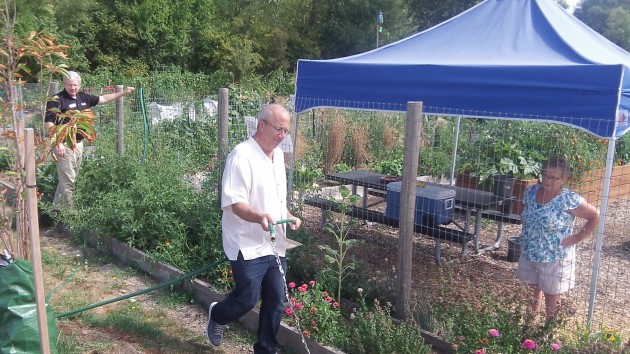 Developer George Diamond gets ready to water some trees. 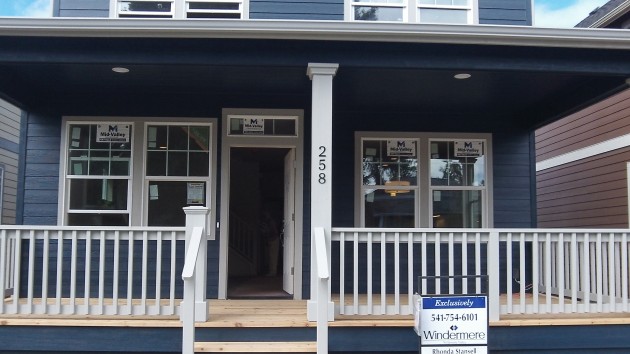