Edgewater: Completed in 2020, as planned 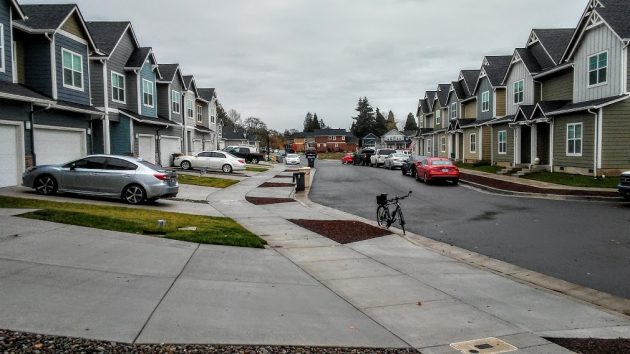 Edgewater Village, seen Nov. 14, includes townhouses on both sides of an extension of Front Avenue.

Before this Covid-scarred year of 2020 is over, let’s not forget that a big development project supported by Albany’s urban renewal program has been successfully completed.

It is, of course, Edgewater Village, the residential subdivision built on a former industrial wasteland on Albany’s riverfront between the railroad bridge and Main Street.

The abandoned seafood packing plant there burned in 2006. The ruins were ground up into mountains of broken concrete, and Albany went looking for a developer with ideas. After many fits and starts, the Albany Revitalization Agency in 2007 approved financing of $2.4 million to cover the cleanup costs and get the project started.

The plans began as a housing development of 146 units. They ended up with new developers and a plan for 58 dwellings, some detached and some attached as townhouses, which the city’s planning commission approved in 2013.

Time and again it became necessary to make adjustments so developers George and Paula Diamond could get the millions in bank financing they needed. Early deadlines came and went, but eventually the schedule called for the last of the units to be finished in 2020. And now they are.

Under its contract with developers, CARA, the urban renewal district, forgives repayment of the initial loan based on a complicated schedule that is not the same for all lots. Part is forgiven for each year that a unit is ready to be occupied, and the rest for that lot when the property is sold.

“We have about $1.8 million left to forgive,” urban renewal coordinator Sophie Dykast reported last week. “Some of that will be forgiven in January.”

Many of the properties remain to be sold, but all appear to be occupied. And in the words of development manager Seth Sherry, “Yes, the project with respect to CARA is effectually complete.”

Sherry says CARA will look forward to some kind of celebration in the coming months to close out the project. But the CARA advisory board meets only monthly, recent meetings have been taken up with other items, and the December meeting this week was canceled.

“It will be good,” Sherry said in an email, “for all to celebrate what they have pulled off own there, albeit somewhat different from what was originally envisioned, but that’s how development goes  sometimes.”

Because the six-acre site lies on the Dave Clark Riverfront Path, my favorite bike route downtown, I have watched the progress since construction on the first five houses started in 2015.

There have been frequent Edgewater updates on this site. If and when CARA does something to mark the completion, no doubt there will be at least one more. After that, we can give this subject a rest. (hh) 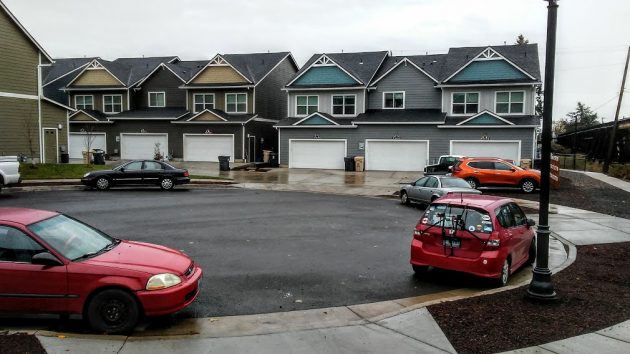 The turnaround of Front Avenue inside Edgewater Village on Nov. 14.