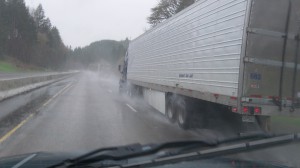 Here’s a mild case of road spray on Interstate 5.

What Oregon could use, especially during the rainy season, is an invention that cuts down on road spray from vehicles hurtling down the interstates.

You know the problem. You are driving down I-5, say, and a line of trucks is in the right-hand lane. You get ready to pass, but you can’t see much , even though your wipers are going as fast as they can go. It’s like plunging into a cloud during a storm. With some passenger cars or pickups, the sensation is almost the same, but mosly it’s the 18-wheelers that leave behind them a swirling mass of water in the air.

For years ODOT has done what it could, replacing freeway paving material with the kind of porous asphalt that absorbs water instead of letting it pool on the surface. Still, on many segments of Oregon highways, lack of visibility in heavy traffic remains a problem when it rains.

I’ve wondered whether better or bigger fenders or mud guards would work. It seems to me that they would. But the trailers of some tractor-trailer rigs have hardly any fenders at all, spraying water in all directions, and especially sideways. For motorists, one answer is to stay off the highways in heavy weather. But of course, most of us don’t have that choice. So, how about somebody inventing an effective fender, one that contains the spray, especially from big rigs? (hh)