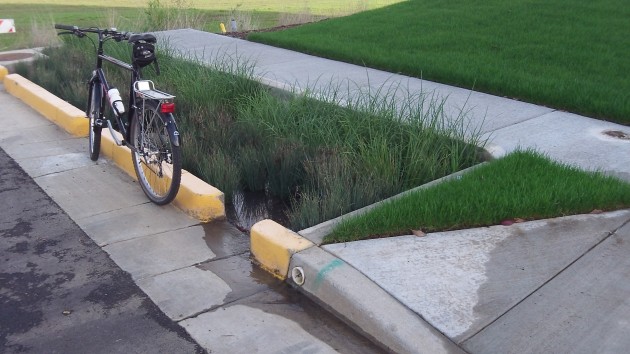 As landscaping, this feature is more useful than grass.

Starting in 2015, Albany will require new land developments of one acre or more to install facilities to collect rainwater from impervious surfaces, like pavement and roofs, and let it seep into the ground. On a ride the other day, I finally saw one of these installations in action. (Imagine my excitement.)

In September, the city council enacted this program on a 4-3 vote, with the mayor casting the tie breaker. The opponents were concerned about the added cost in construction and fees, but the city administration says the program is necessary to comply with state and federal regulations to keep pollution out of our waterways.

Even before they were generally required, over the last few years “bioswales” or “rain gardens” have been installed in various places around town, including Albany Station and on Broadalbin Street downtown. The one I saw doing its job — disposing of runoff and keeping it out of the storm sewers — was on a new street in North Albany.

I have to say that besides looking nice as landscaping, it also was efficient, There were three compartments or cells, the second and third a little lower than the first. Water from the street was trickling into the first, filled with river rock and vegetation. The flow was not enough to reach the lower compartments, but I imagine that in a downpour — of the kind that came later — it would. (hh) 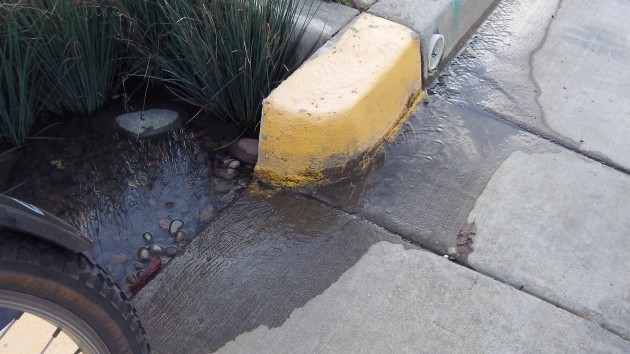