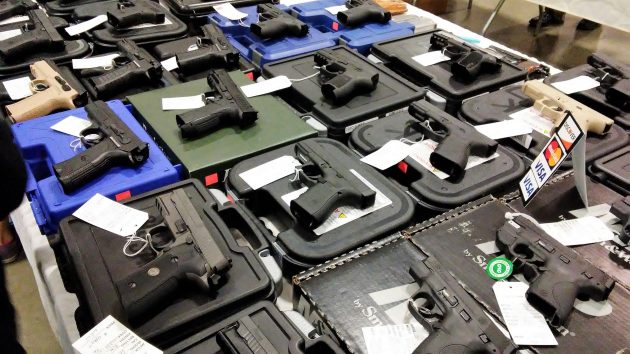 Under IP 43, magazines for these pistols, displayed at an Albany show in 2017, would be illegal unless registered with the state police.

The Oregon attorney general’s ballot title drafted for Initiative Petition 43 gets right to the point: “Criminalizes possession or transfer,” it says, of certain weapons and ammunition magazines.

It’s a point I made in a previous commentary on this initiative. The proposal would create a whole bunch of criminals, making prospective felons out of countless Oregon citizens who have done nothing wrong and endanger no one.

The initiative’s proponents are pushing the measure as a way to increase public safety. It’s good to see that the state lawyers who drafted the ballot title that came out Tuesday did not fall for this scam.

Whether enacting this law would make anyone safer is impossible to say, so the attorney general properly ignored this angle and concentrated on what the text actually says. It would force owners of certain common weapons and magazines to destroy them, give them up, or register them with the state police and not be able to use them for any currently legal purpose except using them at a range. Unless owners complied with this confiscatory mandate they would be guilty of a Class B felony.

There are many good reasons not to sign this initiative and to vote it down if it makes the ballot in November. One of them is that it does exactly what the attorney general says: It criminalizes something that is legal and poses no threat. (hh)