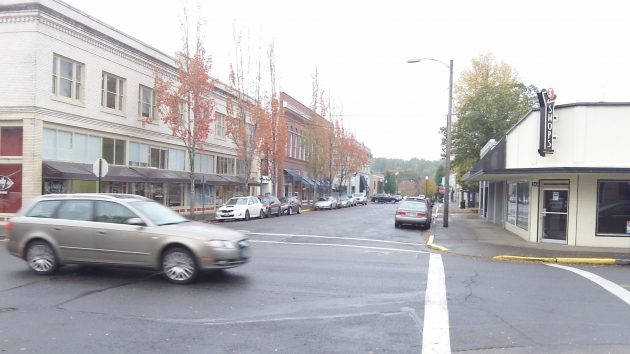 Broadalbin and Third: Both are on the list to get a new “streetscape.”

Albany will borrow $8.4 million from the state of Oregon to pay for upgrading several downtown streets. The urban renewal advisory board learned Wednesday that the city’s request for the money had been approved, and the city council, acting as the Albany Redevelopment Agency, voted unanimously to approve the deal.

The money will be borrowed from the Infrastructure Finance Fund, part of the Oregon Business Development Department. But where the dollars actually come from was not entirely clear after hours on Wednesday night, when state offices were closed and the department’s website yielded no clue. Urban Renewal Officer Nathan Reid thought it came from state lottery proceeds.

Albany will pay off the loan over 15 years from the property tax amounts set aside for urban renewal. Annual payments will be about $339,000. At 2.55 percent annual interest, the interest cost of the loan will be just under $1.8 million, substantially less than the projected cost of $2.9 million if the same amount was raised with conventional tax increment financing, meaning a bank loan.

The downtown “streetscape project,” discussed by the Central Albany Revitalization Area’s advisory board for the past year or more, covers several blocks of Second and Third avenues and their cross streets in the central business district, as well as Lyon and Ellsworth. All the details are still not nailed down, but the project calls for new sidewalks, trees, furniture, lights, pavement and underground utility work. The idea is to make the area so attractive that business and employment will once again thrive.

There was some discussion Wednesday about overhead lights on cables strung across the streets. At one point the CARA board had voted not to have them then added them back in at a later meeting. Councilor Rich Kellum thought this would look too busy, what with all the overhead wiring already there. Ed Hodney, the parks director newly assigned as top administrator for CARA after the departure of Kate Porsche for another job in Redmond, said that at the next CARA meeting on Nov.16, the staff would bring the streetscape design back for another look.

Council members Floyd Collins and Bill Coburn also expressed dismay that ODOT apparently has no plans to participate in the downtown project by renewing the pavement on Highway 20, meaning Ellsworth and Lyon streets. They asked the city staff to press the state agency on that point. They argued that ODOT in recent years had improved the highway through downtown Corvallis, Philomath, Lebanon and Sweet Home and should do so in Albany as well. (hh)