Don’t take this the wrong way… 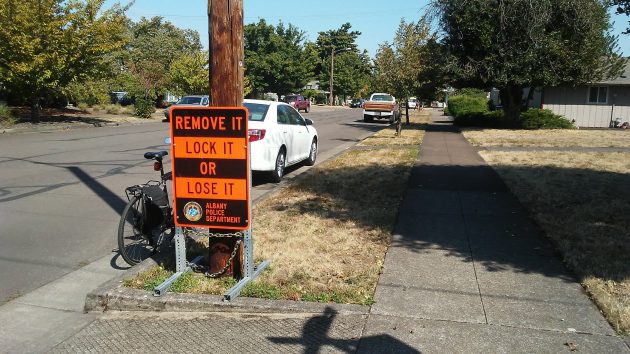 This sign was on Southwest Fifth Avenue on Thursday afternoon.

You wouldn’t think people need to be reminded of the obvious, but in the experience of the Albany police, it helps to do so from time to time. Or at least to make the attempt.

Hence the signs like the one above, which have been popping up in some Albany neighborhoods lately.

Lt. Travis Giboney of the Albany Police Department says the department places this sign — or presumably others like it — wherever there has been a rash of thefts from cars. In the majority of these crimes, the police have found, people left their vehicles unlocked overnight. Or they left potentially valuable items inside, in plain sight.

Purses left in the back seat — or backpacks, or sunglasses, or just about anything else that can be moved — make tempting targets for thieves going around looking for stuff they can steal. But:

It’s possible to misread the sign’s message as this: If you leave your stuff unsecured and somebody steals it, it’s your own fault. No, that’s not right. No matter how careless or forgetful people are, the fault for stealing their property lies 100 percent with the thieves. They don’t steal your stuff because you forget to lock your car. They steal it because they are criminals.

The signs are not meant to blame the victims of crime. All they are asking us to do is not to make things easy for the crooks. (hh)

3 responses to “Don’t take this the wrong way…”