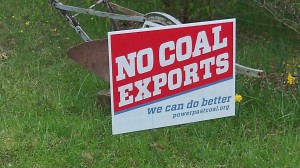 “No Coal Exports, We Can Do Better.” That’s what the lawn signs say, and they are right. We can do better than to export coal to Asia or anywhere else. But we won’t.

We could do better by using the coal in our country. We have lots of it and it is relatively cheap. We could use it to continue to generate low-cost electricity so that people could spend their dwindling incomes on something other than rising utility bills. But we won’t.

We have elected state and federal legislators and chief executives working hard to make energy more expensive by requiring costly alternatives to conventional power sources. These laws and regulations are an outgrowth of the belief that the climate is will change in disastrous ways because we have been burning fossil fuels. The belief is based on models of how certain feedback mechanisms in the atmosphere behave, but the models have failed to predict what is actually happening, such as the general lack of warming in recent years. So why do politicians and the media continue to believe them?

Yes, we could do better if we believed our eyes instead. But so far, the political forces crippling our economy have the upper hand. Sure we could do better, but until those forces are defeated, we won’t. (hh)