Dog case: Not another Blue 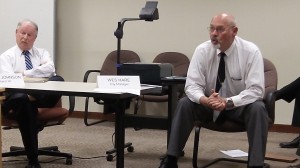 City Attorney Jim Delapoer, at right in this file photo, hopes to avoid having to revoke a dog owner’s permit to have more than two.

The city of Albany faces a potential dog dilemma, but it’s nothing like the uproar about Blue. You may recall that Blue was facing euthanasia in 2011 after biting a toddler, while his owner and supporters fought to keep him alive. The battle ended when Blue was broken out of an Albany kennel and disappeared.

Now the situation is quite different. City Attorney Jim Delapoer laid it out for the council on Wednesday night. City law limits dogs to two per household, but owners can get a permit for two more. The law says the permit for more “shall be revoked” if the owner is convicted of violating any animal control regulation. Another section says the permit “may be revoked” if the permit holder is no longer eligible. Delapoer says the sections appear to conflict.

Now someone is charged with a minor violation — “dog at large” was mentioned — and would have to give up his third dog if convicted in municipal court. The city lawyer thought that might be too harsh. He wants to suggest a plea bargain in which the owner would pay a $1,000 fine but could keep the third dog. Delapoer would give no details of the case Wednesday. And if it works out the way he wants — and the council authorized — there won’t be a big case anyway. Which reminds me: Where’s Blue these days? (hh)