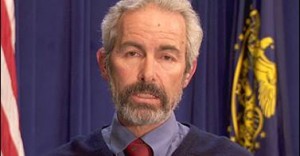 Sen. Floyd Prozanski on KATU’s “Your Voice, Your Vote” on Sunday.

State Sen. Floyd Prozanski wants the 2014 legislature to pass a bill requiring background checks on all gun buyers, not just those buying firearms from dealers or from private parties at gun shows. But he has no proof the bill is needed, or that it would do any good. Prozanski says — in an interview with Portland TV station KATU broadcast on Sunday — that it’s too easy for crooks to buy guns and the bill would close a loophole. But he has nothing to back this up.
He reports that the Oregon State Police Firearms Instant Check System handled a quarter-million background checks each in 2012 and ’13. And each year, about 2,300 people were found unqualified to buy a firearm, so those sales did not go through. The numbers say nothing about gun transfers where no background check was required. And they certainly say nothing about the number of gun transfers to people not entitled to have one.

The police logs in local papers often mention someone was arrested for being a felon in possession of a firearm. But they never say how the felon came to be “in possession.” Did he get the gun legally before he became a felon? Was the thing just lying around where he happened to be arrested? Or had he stolen it? We don’t know.

On Jan. 17 the three Democrats on the Senate Judiciary Committee, including Chairman Prozanski, voted to introduce his proposal as a committee bill rather than with an individual sponsor. Republicans Jeff Kruse of Roseburg and Betsy Close of Albany voted no. The bill would require a private seller to check with the Firearms Instant Check System to see if his intended buyer was entitled to buy it. The buyer would have to fill out a form. If the procedure is the same as for buying from a dealer, two thumb prints would be required. And if the seller fails to comply with any of this, he could be charged with a crime.

The bill fills a loophole only if now, without the law change, guns used in crime are bought from law-abiding private owners in order to avoid the background check. How often does this happen? And again, we don’t know. But considering how often guns are reported stolen, crooks would rarely need to buy one from a legitimate owner.

Prozanski sees his bill as a deterrent. If thieves deal in stolen weapons, does anyone think one more deterrent will make them stop? (hh)

You’re invited to listen as host Jeff McMahon and I talk about this and other issues from 11 to noon Tuesday on KGAL radio,  AM 1580.