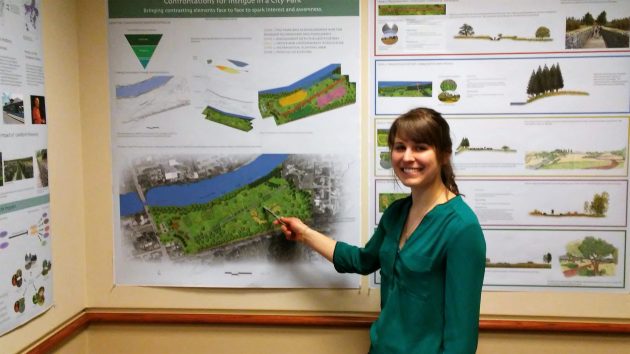 Brianna Heese, a grad student from Missouri, incorporated elements of Oregon history in her concept of the landscape design.

It took each of 13 graduate students in landscape architecture only a few weeks to come up with a different concept of how Albany might some day develop the East Thornton Lake Natural Area. They got the assignment in January, and on Friday they showed their plans to a small but appreciative audience at City Hall.

The students are in the first year of their master’s program in landscape architecture at the University of Oregon. Their class took part in the Sustainable City Year Program, a partnership with the city of Albany to study and make recommendations on all sorts of issues identified by the city.

Ed Hodney, parks and recreation director, said the students’ work represented an “incredible array of ideas.” Their concepts may come in handy once the city hires a consultant to draft a master plan for the East Thornton Lake acreage.

Albany bought the 27 acres of former farmland on the south bank of East Thornton Lake in 2009 for $2.25 million from a Salem developer. Neighbors had fought the developer’s plans for a big subdivision there, and the city purchase ended the land-use fight.

In complexity and imagination, some of the students’ proposals seemed to go beyond the thought when the land was bought that the area be left mostly natural, as the name implies. But this was an assignment, so they showed more innovation and creativity than you’d think are necessary to leave a natural area alone.

One design called on visitors to engage with the history of the valley. Another called for a pattern of paths that resembled the historical flow of the Willamette River. One suggested trees with edible fruit. Another included symbolic references to neighbors trusting each other, and one carried out the notion of balancing acts. It was all quite imaginative, and the graphics illustrating the presenters’ spoken summaries of each concept drove home their points. It was dazzling enough to prompt one lakeside resident to say it deserved a “standing ovation.”

Other student groups in the program had studied other projects, including one to provide “collaborative sports facilities,” and presented their conclusions during the last few days. I missed those, but you and I can hope for the details if and when the university or the city publishes a summary of the entire program when the Sustainable City Year ends after spring term. (hh) 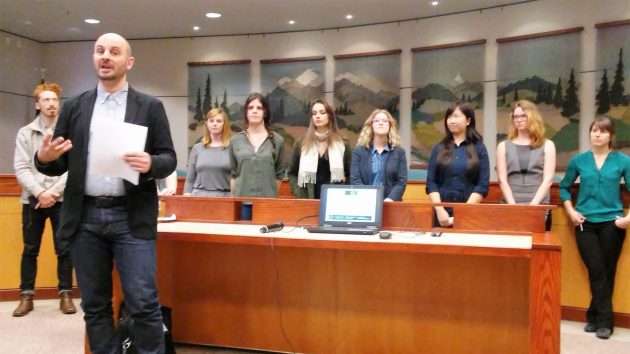 Instructor Jacques Abelman and some of his landscape design students in the Albany project. 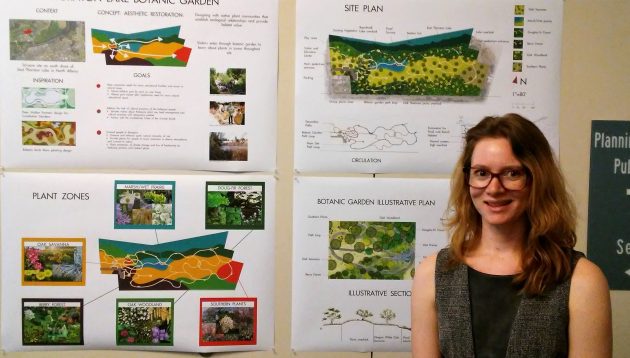 Deanna Lynn, of Monterey, CA, proposed the idea of a botanical garden. 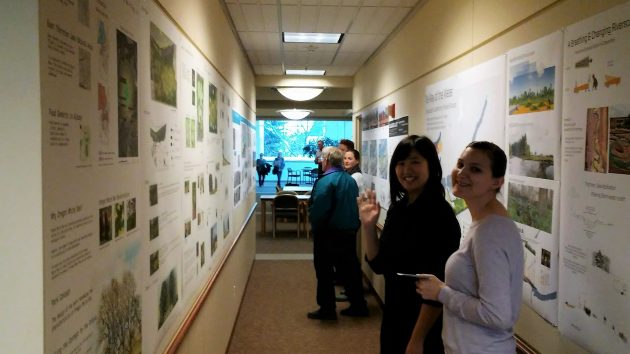 Some of the concept-explaining posters were displayed in the upstairs hallway at City Hall.