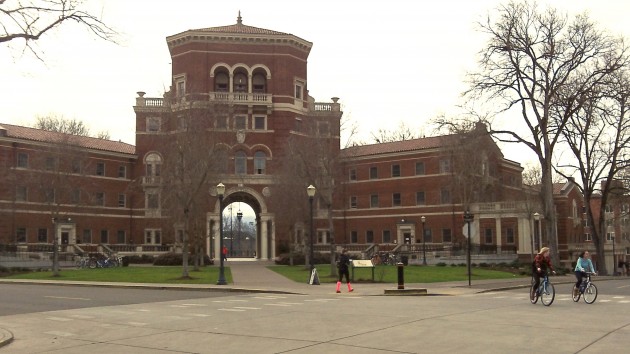 A quiet Sunday afternoon on the campus of Oregon State.

It’s time to repeal or just ignore Oregon’s so-called 40-40-20 goal, which isn’t doing anything for anybody except the higher education establishment. But the president of Oregon State, among others, thinks it’s still a great idea.
In one of its occasional utopian flights of fancy, the legislature in 2011 adopted the 40-40-20 concept as a law. It says that by 2025, 40 percent of adults should have bachelor’s or advanced degrees, another 40 percent should have at least an associate degree or post-secondary credential, and all the rest should have at least a high school diploma or equivalent.

This sounds OK as a vision or a goal. But since the state does not have the means to carry it out, it was stupid to pass it as a law. And now it is also beginning to look misguided as a goal.

Higher education now costs huge amounts of money, enriches the top ranks of people it employs, throws students and their families deep into debt, and often does not pay off in terms of economic advantage either for new graduates or society as a whole. There simply are not enough jobs where a college degree is necessary or even helpful.

But the drive to churn out more graduates continues. President Ed Ray of Oregon State, when he announced on Jan. 30 that OSU had surpassed $1 billion in donations since 2006, said the university plans to keep growing. It plans to reach an enrollment of 28,000 students in Corvallis, 2,000 more than now; increase its campus in Bend so it enrolls up to 5,000 by 2025; enroll another 7,000 students online, and establish a marine studies campus in Newport for 500 more. (Is there some shortage of marine scientists, a shortage that is holding back Oregon’s economy?)

Citing 40-40-20, Ray called on the legislature to increase college funding, which it can’t do because the state doesn’t have the money. (It will have even less when the vast expansion of Medicaid under Obamacare starts taking bigger bites out of the general fund.)

Oregon would be far better off with a more aggressive emphasis on vocational education. The idea would be to prepare more young people for jobs that actually exist and can’t be exported. Under such an approach, the state colleges would not have to grow as fast or as big. They would not need billion-dollar fund-raising campaigns and they might cost less for those who want to prepare for careers where degrees are a must. And fewer people would enter the working world burdened by tons of oppressive debt. (hh)