Directions: The fix that wasn’t 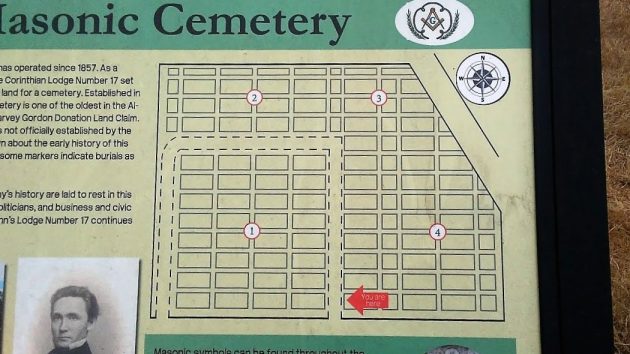 If you look up on this cemetery map, you are looking west, not north as the compass rose claims.

Compass directions are a continuing challenge to the makers of this interesting sign, which tells visitors what’s what in the historic Masonic Cemetery off Albany’s Broadway Street.

The sign went up two or three years ago, and it’s a big help to people wanting to know a little about Albany’s history. And though it may have seemed churlish, in January 2015 I pointed out that the compass rose in the upper right was backward, giving north as south and east as west. That prompted a reply from board member Kay Burt of the Albany Regional Museum, who noted that the sign project had received a grant from the Oregon Historic Cemeteries program. “I had hoped that nobody would notice for a few months while we try to figure out a ‘good’ fix for the compass. One of our grant folks put the compass in without checking with the rest of us, unfortunately.”

Time went by, as time has a habit of doing. It wasn’t until this week that I got another look at the directions on that map. And sure enough, a change had been made. Unfortunately, it wasn’t a fix, at least not as far as the map is concerned.

The compass rose now has north where, on the map, it is actually west. The other three directions are necessarily offset 90 degrees as well. So how about another fix: Turn the compass 90 degrees clockwise and the directions on the rose will correspond to the layout of the cemetery map.

This is no big thing, obviously. Nobody needs that compass to navigate among the graves or to find one of the more prominent markers, that of Delazon Smith, who helped start Albany’s first paper, the weekly Oregon Democrat, in 1859 and whose portrait is reproduced on the map.

But you might get dizzy if you look at that compass and the nearby street –Broadway, which runs north and south — and try to figure out where you are. (hh) 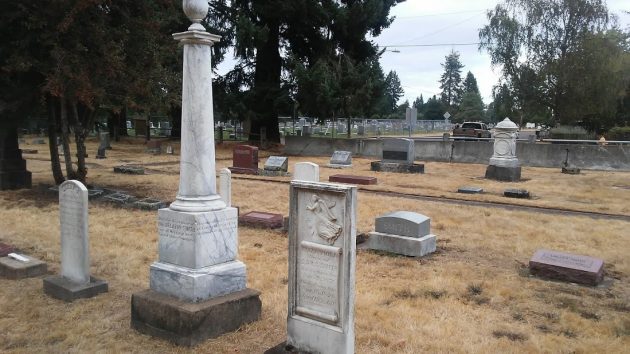 This tall monument marks the grave of Delazon Smith.

One response to “Directions: The fix that wasn’t”