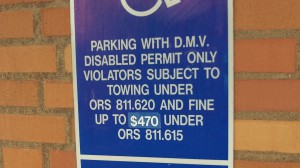 Don’t even think of parking here.

What’s it worth to make a mistake and park your car in a slot reserved for the disabled? According to this sign on a wall in downtown Albany, this particular offense could cost you not just the price of having your car towed and then bailing it out but also a fine of up to $470. Together, the cost of the tow and the maximum fine probably bring the expense close to a thousand dollars. Just for parking in the wrong spot?

The sign makes me think we are going overboard in threatening people with punishment for doing something which is wrong but which, relatively speaking, is not really the crime of the century. Remember that some legislators want people to be fined up to a thousand dollars if they’re caught using a hand-held cell phone driving. Big fines can lead to more trouble if people can’t pay them and try to blow them off. Sooner or later some court will issue a warrant for their arrest, and then they are in real trouble, costing even more money.

Now, taking a disabled parking spot is wrong, but since most of them are unused most of the time, it also does not necessarily cause any harm if a thoughtless person ignores the sign. You’d think that a civilized society could rely on manners and compassion to leave these spaces available for those who need them. If the threat of severe punishment is really necessary, then we might as well get serious and put violators in prison for at least a year. And if that doesn’t work, is capital punishment next? (hh)

Dawn Sutherland responds (via Facebook): I understand the point you are trying to make, but you might want to consider an alternative perspective.  As the wife of a paraplegic, if non-disabled people “accidentally” park in the handicapped spot, & there are no more spaces available, then my husband cannot get out of the van if he’s driving alone.  There is a reason they are marked as such.  I’m sorry.  I don’t buy that someone makes a mistake when they park in such a space, provided it’s clearly marked.   They willfully choose to disobey the law by parking where they know they don’t have a permit.  Willful disobedience of the law is not a mistake.  It’s a crime…regardless of how trivial it may seem.  When people take up the handicapped spots, they are denying those that require those spots access to whatever venue it’s for.  You might as well stand in front of the doors to that establishment & bar the person from entering…it’s the same thing.  The price of the ticket is meant to ensure that this “mistake” does not become habitual.  When it affects other people’s ability to enjoy the destination, just because “you” want to park closer, then you have to pay.