Dark corner: City working to get it lit 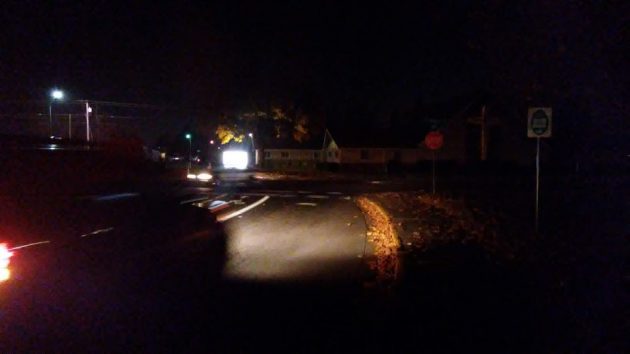 Headlights and a church’s sign were about the only things lighting the corner of Geary and Grand Prairie the night on Nov. 14.

A question about a poorly lighted South Albany intersection, potentially dangerous to pedestrians using the crosswalk these dark winter nights, has not fallen on deaf ears at City Hall. Instead, Albany Public Works is working on a fix.

The question had come from Albany resident Rachel La Brasseur, who asked in an email on Nov. 11 whether I had ever noticed how dark it was at the corner of Grand Prairie Road and Geary Street. It’s where two major streets meet, yet there’s no light directly above. And pedestrians in the crosswalk are all but impossible to see for drivers making the turn from Geary.

I confirmed her observation a few nights later and wrote about it here on Nov. 18.

A couple of days before Thanksgiving, I heard via email from Staci Belcastro, the city engineer.

“Chris Cerklewski,” she wrote, referring to a fellow engineer in her department, “has completed a design to improve the lighting at the intersection and is reaching out to Pacific Power to discuss installing two new light poles, and replacing the existing 200W high pressure sodium light fixture with a 250 LED.”

The existing street light is a short distance south of the corner, and when I checked on the evening of Nov. 14, its light didn’t illuminate the intersection much and the crosswalk not at all.

Belcastro didn’t yet have a schedule for making the lighting improvements, but with luck — and cooperation from Pacific Power — maybe it will get done before daylight savings time returns next spring. (hh)


9 responses to “Dark corner: City working to get it lit”