Written May 2nd, 2016 by Hasso Hering
Comments: one response.

Does it count as distracted driving if you lift your eyes from the highway to read the overhead sign with an implied warning against distracted driving? Or how about driving through a long work zone on I-5 while snapping photos to illustrate a story about ODOT’s latest safety campaign?

ODOT says that in 2014, the latest year for which it has complete data, there were nearly 500 crashes in Oregon highway work zones. And this despite the multitude of warnings and signs and orange cones and barrels that mark construction sites on our public roads. A cynic might say there would be fewer crashes if there were fewer construction zones. But that would be wrong. They don’t fix the highways for fun. In most cases they fix the roads because they need fixing. And they need fixing because with all our driving back and forth, we have worn them down.

This month, ODOT hopes to call public attention to bad driving in construction zones. More to the point, it wants us to drive better and more safely. To that end, it arranged to have two bridges bathed in orange light during the first two weeks in May. The bridges are the Morrison in Portland and a railroad bridge in Salem.

Why those two? Because, ODOT’s David H. Thompson explained to me, these two happen to have flood lights as well as managers willing to deploy orange filters to call attention to the current safety campaign.  “I wish there were more lighted bridges in other Oregon cities,” Thompson said in an email.

I don’t know how many motorists are going to improve their driving because they happen to see a bridge bathed in an orange glow this month. Along with ODOT, I hope lots of them.

On my drive up I-5 Monday, I noticed something more immediately effective than orange lights in protecting construction workers from bad drivers. On a segment of I-5 south of Cottage Grove, they’re rebuilding the freeway. There are plenty of orange cones and barrels to corral the traffic, but what really keeps the workers safe is a long line of barriers made of sturdy concrete.  If you go through there, stay away from the barriers, keep your speed down and everyone will be fine. (hh) 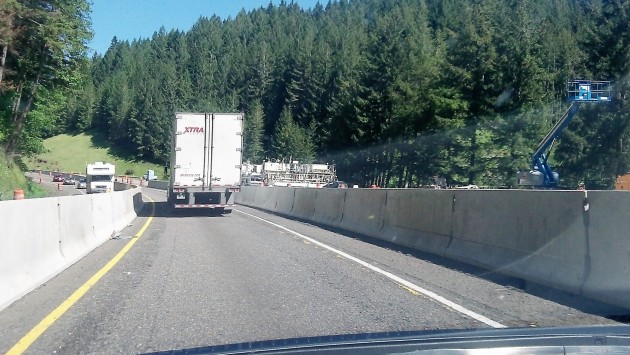 
One response to “The dreaded DD: ‘distracted driving’”