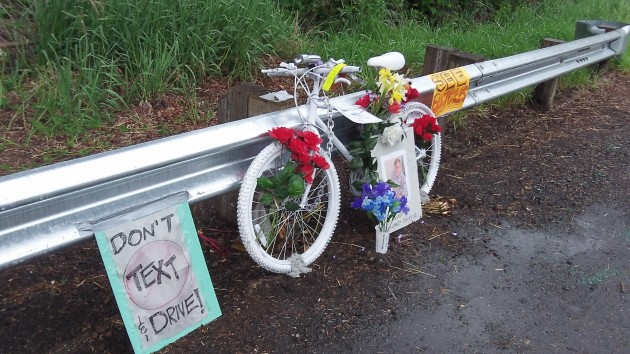 The crash site display has long been removed but was still there in April.  Texting was NOT an issue in this crash.

The car crash that killed Albany bicyclist Grant Keith Garner last winter will not result in criminal charges against the driver. That’s the word from Jay D. Hall, an assistant district attorney in Lane County.

The crash happened at 5:41 p.m. on Feb. 17 on the curve where Oakville Road turns right and becomes Queen Avenue. Driving a 2001 Subaru Legacy, Thanh Xuan Nguyen, 24, of Corvallis, was driving on Oakville from Highway 34 toward West Albany High School. She failed to make the turn and her car crashed into a guardrail, bounced off and spun into Garner, 60, who was pedaling home after work in the opposite direction.

Hall had been reviewing the case at the request of Linn County DA Doug Marteeny. He summarized the crash investigation by the Linn County Sheriff’s Office and his own review in a four-page “case evaluation.”

Among the details: There is no evidence the driver used a mobile phone before the crash or that she had used or was impaired in any way by drugs or alcohol. She said she had set her cruise control at 60 mph coming up Oakville, noticed the speed zone change to 40 mph before the curve, tried to turn off cruise control but could not and could not press the brakes.

“In essence, Ms. Nguyen credits a mechanical irregularity or defect for her inability to regulate the speed of her vehicle going into this turn,” Hall wrote. “The truth or validity of this assertion could not be disproven by the very through investigation by the Linn County Sheriff’s Department.” Investigators could not test the cruise control without the vehicle in motion. They did find a code indicating the brakes “may not have been functioning properly during the crash but couldn’t say for sure.” Also, it turned out the vehicle had been salvaged and rebuilt after being in a previous crash.

“Based on the totality of these circumstances,” Hall wrote, “there is insufficient evidence to prove criminal charges beyond a reasonable doubt.”

After the crash, Hall pointed out, Nguyen stayed on he scene, immediately cooperated with investigators and continued to cooperate during the months of the investigation.

The crash site is on one of my regular cycling routes. The paint marks left by crash investigators are faded but still visible, and I see them every time I go by there. Thus reminded, I kept in touch with the Lane prosecutor asking about progress in the case. His evaluation and conclusion was dated Wednesday, and he emailed me a copy Thursday.

“Although speed was certainly a factor in this crash,” he explained on the first page, “speed alone does not automatically equate to criminal conduct or a criminal mental state.” (hh)

Postscript: Sometimes drivers get a traffic ticket even though criminal charges are not warranted. I asked Linn County Sheriff Bruce Riley about this. His reply:  “Typically when the district attorney reviews a case such as this, consideration is given to all possible charges including violations. DA Hall makes no reference to charging a violation so no, I don’t see any citations being issued in this case.”