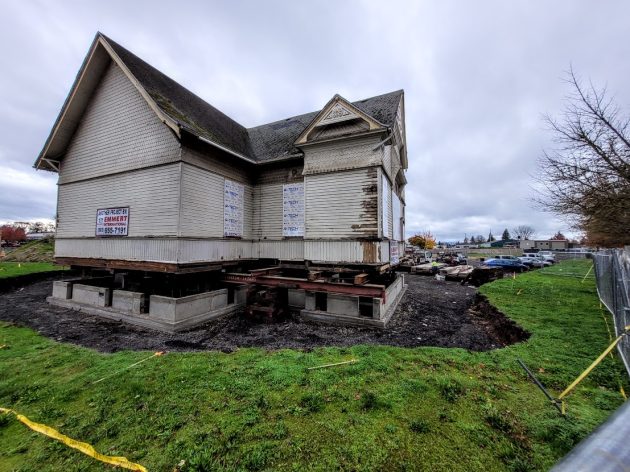 The Cumberland building hovers over its foundation on Nov. 11, 2021.

Pretty soon now the former Cumberland church is going to settle down on its new concrete foundation, another milestone in the private campaign to turn the historic building into a community center on the east side of old Albany.

As everybody knows, the former church was moved to a vacant lot at Pine Street and Santiam Road last month, making the trip from Santiam and Main Street (405 Main), where it was built in 1892.

After I took the above photo on Nov. 11, I checked with Joel Orton. He’s the vice president of the Cumberland Community Events Center, the private nonprofit that acquired the building from the city and arranged to have it moved.

The foundation was constructed after the building was already in place. It was done by Double Eagle Construction as a subcontractor to Emmert International, the company that moved the building. Orton told me he expected the building to be lowered on its foundation in mid-December.

(Land near the Cumberland’s new location, including the nearby skatepark, used to be the site of the Veal Chair Factory, which was still in business when our family moved to Albany in 1977. When it closed a few years after that, we bought four sturdy chair legs from the remaining inventory. They now make up the legs under an old California job case that weighs a ton because it’s full of 120-point lead type.)

The Cumberland group relies on donations to advance its project, the creation of a community center for all kinds of events. I wondered whether the foundation was an in-kind donation.

“It was not,” Orton said. “Our nonprofit is paying for the work with funds made available through the generosity of local donors.”

There’s a long road ahead before the venerable building can reopen its doors for a public event. If you want to help hasten the day, check the Cumberland website for information on how you can help. (hh)