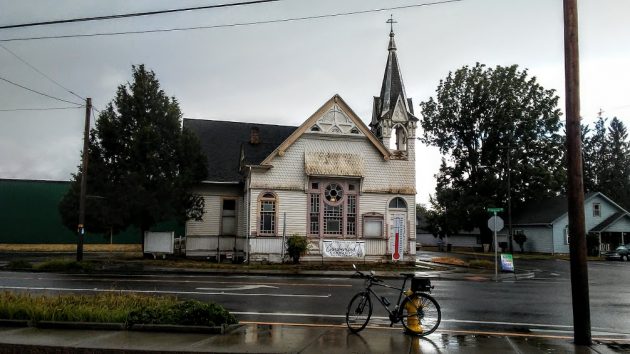 The Cumberland Church on a rainy day in September.

The Albany Landmarks Commission Wednesday unanimously approved a plan to move — and thereby save — the historic Cumberland Church.

A nonprofit neighborhood group, the Cumberland Community Events Center, intends to move the structure from the corner of Main Street and Santiam Road to the corner of Santiam and Pine, about 1,000 feet down Santiam.

The group is buying a city-owned lot at Santiam and Pine for $69,000 and negotiating to obtain three additional lots from the city at the vacant site, next to the Albany Skatepark. The city, which has owned the old church since 2000, plans to sell it to the group for a dollar just before it is ready for the move. Just when that might happen is unknown.

Joel Orton, one of the Cumberland group’s leaders, spoke during the virtual Landmarks hearing. He said a Portland company experienced in moving buildings has examined the structure and determined it can be safely moved in one piece.

Before the move, though, the bell tower will have to be taken off. This will allow the tower to be restored before it is put back once the church is in its new place.

Other details the commission learned from Orton:

♦  The basement will not be part of the move or restoration. It contains a kitchen and non-functioning restrooms. At the new site those support functions are to be housed in an addition.

♦  The church bell in the tower was removed some time ago, and the city has it. Orton says it will be put back where it belongs once the church is moved and the tower is remounted.

Friends of Historic Albany submitted a letter in support of the group’s request for Landmarks approval. Another letter in support, with four signatures I could not understand, also was read.

The Landmarks board was delighted with the effort to save the old church by moving it. Later in its meeting the board voted to honor the Cumberland group with a historic preservation award for its efforts so far. (hh)