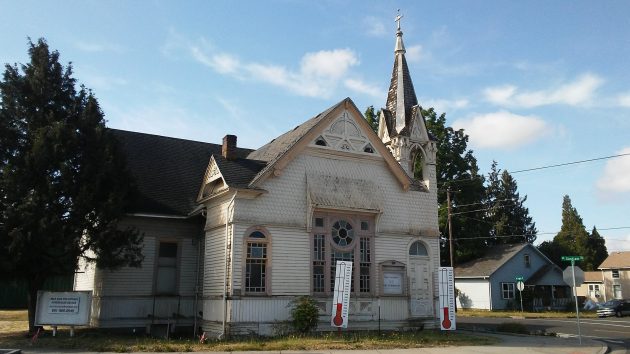 The former Cumberland Presbyterian Church the way it looked on Saturday morning.

It’s been more than a year since the Albany City Council voted to try to get rid of the former Cumberland Presbyterian Church it owns at Main Street and Santiam Road. Volunteers have been working on saving the building, and now the council faces a decision on whether to spend money on major repairs.

It was on July 9, 2018, that the council voted 4-2 to instruct the staff to explore the idea of finding a buyer who would move the historic building to a site the city doesn’t own. Nothing came of that instruction, it appears.

Last week, Councilman Rich Kellum asked about what continued ownership of the building was costing the city, in utilities for instance. On Friday, City Manager Peter Troedsson had an answer that hinted at bigger cost concerns coming up.

In his weekly summary of items of interest, Troedsson wrote: “At Wednesday’s council meeting, a question was raised about the city’s on-going costs of ownership of the property at 401 Main St. Although the question focused on utility bills, major maintenance needs in the near future present a greater concern. Staff will provide a comprehensive update on September 25. Utility bills averaged $62.16 per month during the last fiscal year.”

Before the council vote in July 2018, a task force appointed by the mayor had talked about getting the building moved a few hundred feet up Santiam Road to a vacant piece of city property near the Albany Skate Park. The idea was to have it remodeled there as a public community center. Mayor Sharon Konopa and Councilmen Dick Olsen and Ray Kopczynski (since succeeded by Alex Johnson II) advocated using urban renewal funds for part of that project, but the council vote foreclosed on that approach.

The majority at that point — Kellum, Bessie Johnson, Bill Coburn and Mike Sykes — didn’t want to spend money on the building in view of the city’s more pressing needs, brought into sharper focus in the budget dicussions since then, including the necessity of leaving some police jobs unfilled.

The city government saddled itself with this white elephant when it bought the church for $150,000 in 2000, believing the property would be needed for a Main Street improvement project. Eventually the street project was redesigned and the former church, dating from 1892 and enlarged in the 1920s, was left where it sits.

If memory serves, in 2000 nobody objected to demolishing the building for a street project.  If somebody had, maybe the project could have been redesigned right then and the church would have remained in private hands. Then it would be somebody else’s problem now.  (hh) 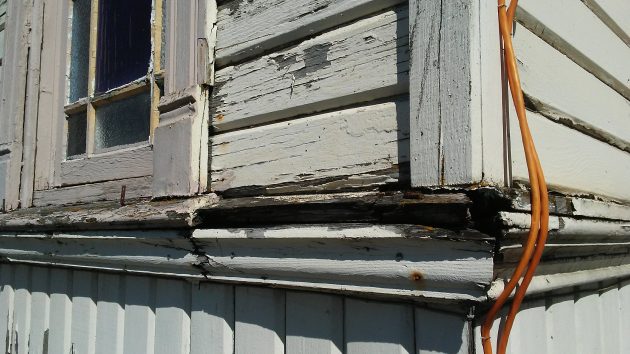 A corner of the building this March. The council will hear about the need for repairs next month.