Crossing the line? That’s a fine 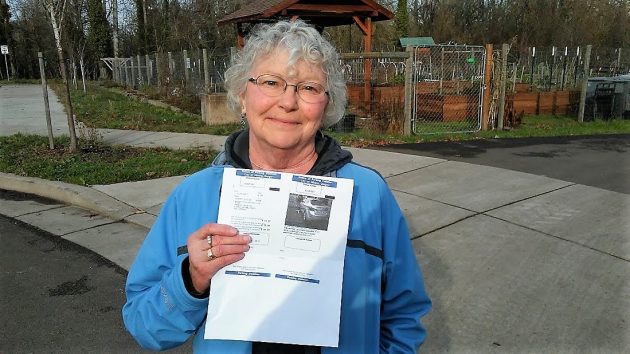 Carolyn Larime holds a copy of her ticket, complete with a photo of her car parked across the white line in front.

Here’s a heads-up about curbside parking in downtown Albany: If you cross the white lines painted on the street, you run the risk of getting a $25 citation, even if crossing the line is the only way to fit between cars already parked.

It’s what happened to Carolyn Larime on the afternoon of Dec. 27. To her it seemed as though somebody was trying to play the Grinch.

“Two days after Christmas,” she wrote in an email, “I was showing my out-of-town guest our wonderful city. We toured neighborhoods, visited the Carnegie Library, ate in a local restaurant, and spent Christmas cash as we browsed downtown shops. Our last stop, of course, was the carousel. We had so much fun my friend even started talking about moving here. It was a great holiday time until we got back to my car and found a ticket on the windshield.

“I have lived here for 15 years and have never heard of a ‘Parking Violation’ downtown,” she continued. “The $25 citation was for the egregious offense of not parking within the white lines. There was even a photo of my car in its offensive position. What the photo didn’t show was the whole line of ‘illegally’ parked cars that were there when I parked. Did they all get tickets?

“I began to wonder if I had missed a sign or some sort of posting of this traffic regulation. I scoured the downtown streets and found none. As I drove through town, I did notice many cars parked outside the lines. I guess the City of Albany has found a new ‘cash cow’ to ring in the New Year. Citizens beware!”

The ticket was issued about a quarter to 4 that Wednesday afternoon. It showed the front of her silver Hyundai straddling the front line of a parking spot on First Avenue W. by about a couple of feet. Larime told me she backed into that spot when it was the only one available on that side of the street. By the time the ticket man came around, the cars in front and back evidently had gone.

Albany’s downtown parking regulations are enforced by ParkWise, an arm of the Albany Downtown Association. I asked Lise Grato, the association’s executive director, about this case.

“It is unfortunate that your reader selected a spot where her car couldn’t be parked legally” she wrote, also by email. “In addition to street parking, there are four customer parking lots in Downtown Albany. Although it’s frustrating when spaces are not legally usable, it’s the responsibility of each driver to park within the lines. Each car is individually reviewed. How adjacent cars are parked does not void the requirement for legal parking.”

She also told me that Parkwise writes about 150 tickets a month, and she or the ParkWise manager often reviews tickets and their circumstances when customers come in to complain.

“The goal of ParkWise is to educate as we enforce the City of Albany parking regulations,” Grato wrote. “Photos are now printed on each ticket making it easy to see the violation. Of the citations ParkWise issues each month, about half are warnings. Other drivers are greeted and given friendly reminders without a citation. Even those who are fined may be given a fine reduction depending on the circumstances and if it is their first ticket.”

She added this: “Thank you for helping educate visitors to Downtown.”


26 responses to “Crossing the line? That’s a fine”