Crocker sidewalks all the way? Not yet 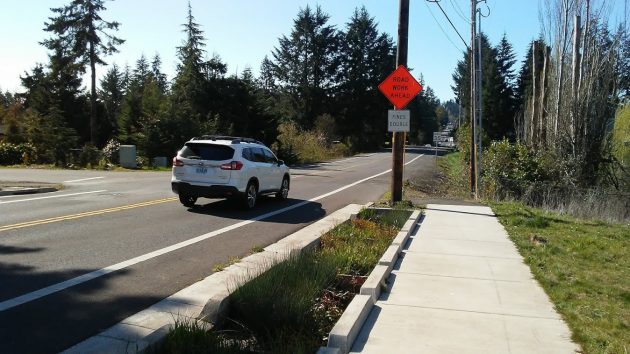 Where the sidewalk ends: Looking south on Crocker Lane on April 12.

A reader wondered if Albany has any plans to complete the new sidewalks on Crocker Lane for the street’s entire length. And the short answer is no.

Sidewalks were built along the northern segments of this road in North Albany with the development of several subdivisions. The southern segment retains the look of the rural lane which this used to be, with paved shoulders and ditches.

The reader who asked about this says connecting the walks all the way to Gibson Hill Road “would make it so much safer for walkers and runners.”

She points out that the city has taken jurisdiction of the street where it has been rebuilt to urban standards, between Valley View Drive and Meadow Wood Drive. But the southern leg remains a county road under the jurisdiction of Benton County.

The city typically does not take jurisdiction of a county road until and unless the county has paid for upgrading it to urban standards, with curbs, gutters, sidewalks, storm water facilities and so forth. Nobody knows if or when Benton County will do any of that on Crocker.

As it happens, the old Crocker Lane had wider paved shoulders than many other county roads in the North Albany area, and the unfinished section still does. While paved sidewalks all the way will no doubt be built at some point in time, pedestrians do have a place to walk until this comes about. (hh)

5 responses to “Crocker sidewalks all the way? Not yet”