Crocker: ‘As quickly as possible’ 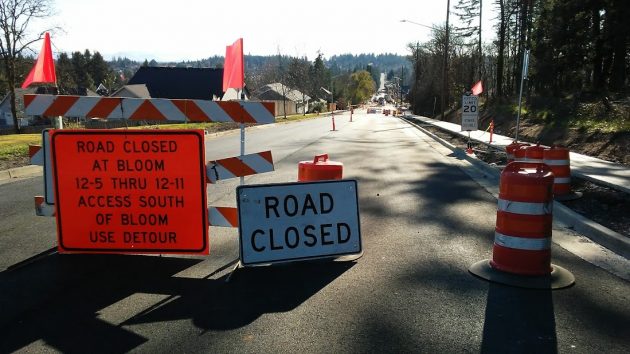 Looking south along Crocker from the corner of Valley View on Wednesday afternoon.

North Albany residents in the surrouonding neighborhoods are wondering when the Crocker Lane reconstruction is going to be finally finished. The answer I got was that the contractor’s crew is working to get done as fast as they can.

“I live on the corner of Crocker Ln. & Cluster Oak in N. Albany,” John Campbell wrote me last week. “As we are now in December and the road project is still not finished, I was wondering if a new update was available.”

Once again I asked Chris Cerklewski, the engineer in Albany Public Works who is overseeing the project. He reminded me that the original contract completion date was Nov. 3. But “several minor items” pushed the target to Nov. 13, and the contractor now is being assessed “liquidated damages” for each day past Nov. 13 until the street is finished in accordance with the contract. (He had told me earlier that the damages were $800 per day.)

Why the delays, I wondered. “The contractor,” Cerklewski wrote, “has not been able to direct as many resources to the project as they had anticipated when the project was bid.” But, he added, “the contractor continues to work to complete the project as quickly as possible as weather permits this time of year.”

On Wednesday, signs announced upcoming dates for the closure of part of Crocker. So it looks as though the completion date for the entire project is still a ways off. (hh)


7 responses to “Crocker: ‘As quickly as possible’”