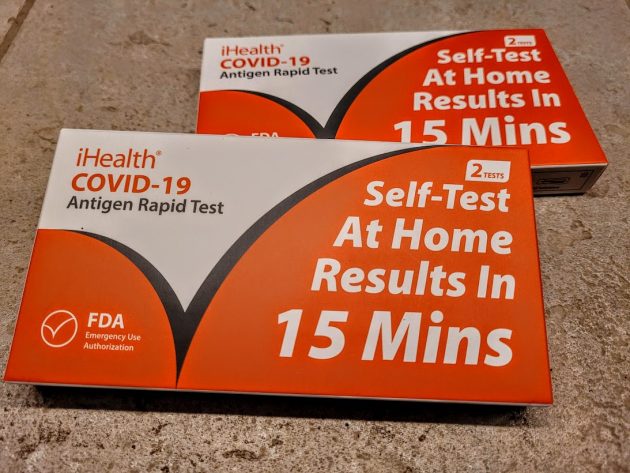 These are the test kits that the Postal Service delivered to my house.

Say what you want about the government’s response to the Covid pandemic, but give credit to the post office for doing its part.

The U.S. Postal Service got the job of sending free self-testing kits to millions of Americans. And as far as I can tell, it has come through.

In Washington, the White House announced the campaign on Tuesday, Jan. 18. Because do-it-yourself test kits were said to be hard to find in some parts of the country, the government would send four of the kits to every household in America that asked for them.

The post office, they said, would open a website to take requests starting the following day, Wednesday. But in fact the service had already done so, because when I heard about this from one of my sons that Tuesday morning the 18th, I went online and placed an order for our house.

This Tuesday morning, yesterday, the post office sent me an email. “Hello Covid Test Recipient,” it began, “your item is out for delivery on February 8 at 6:10 a.m. in Albany, OR 97321.”

The message added that USPS expected to deliver the package by 9 p.m. Our mail delivery person did a lot better than that. The kits were in our mailbox by early afternoon.

The White House had said the government was preparing to ship 500 million test kits, and orders to the website would be filled in up to 12 days. In an operation that big, you’d expect some glitches and some slippage of the schedule.

But it could not have taken more than a few days to process my order. Then they sent it to wherever the kits were purchased or stored, and then they put them in the mail, from Topeka, Kansas. And they not only got it here in just under three weeks total, but they also kept track of it and notified me the morning it would arrive.

From a logistics standpoint, that’s way better than what I had expected.

Now, as for the test kits themselves: The package says you can use a single test to confirm Covid if you have symptoms. But if you don’t have symptoms, you should use at least two tests.