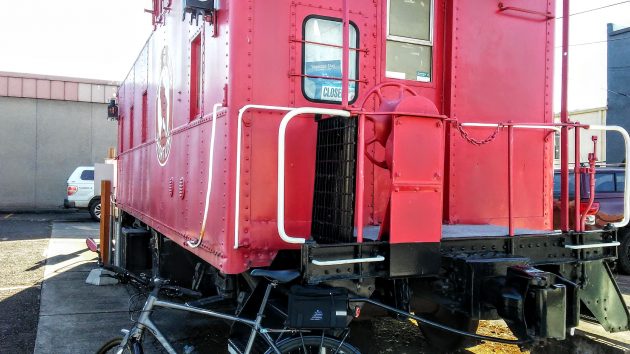 A 2019 Veterans Day poster is left in the window of the Vets Day Memorial Assn., a former caboose downtown.

With big events around the world falling victim to COVID-19, it comes as no surprise that Albany’s Veterans Day parade this year may be called off as well.

There was talk about this at Monday’s virtual meeting of the Albany City Council. Manager Peter Troedsson put it this way: There’s a high percentage chance that the parade won’t happen, or words to that effect.

The council was talking about how to rebalance that portion of the city’s 2019-21 budget that depends on income from the 9 percent tax on the price of hotel rooms, the Transient Lodging Tax or TLT for short.

Revenue from the tax supports tourism promotion by the Albany Visitors Association and the Albany Downtown Association, as well as a number of smaller appropriations such as $3,000 for police overtime associated with the parade. All would be reduced and some would be eliminated starting July 1 under an economic development budget proposed by the city staff.

The council debated this for about an hour but reached no conclusion. But there was sentiment for tapping what’s left of the city’s Pepsi settlement fund for $100,000 or so. (The fund still has about $1.8-$2 million left, according to the staff.) The issue likely will come up again at the council’s virtual meeting Wednesday night.

Councilor Rich Kellum asked that the council be informed by email about any decision on the Vets Day parade. He was told that Patty was drafting a letter. Presumably that was a reference to Patty Louisiana, head of the volunteer association that has organized the annual Nov. 11 parade for the last several years.

Among the possible rationales: Without school bands, there’s not much of a parade. Musicians can’t practice marching unless schools reopen in the fall in more or less the accustomed way, and now there’s doubt about that. No school, no bands, no parade. (hh)