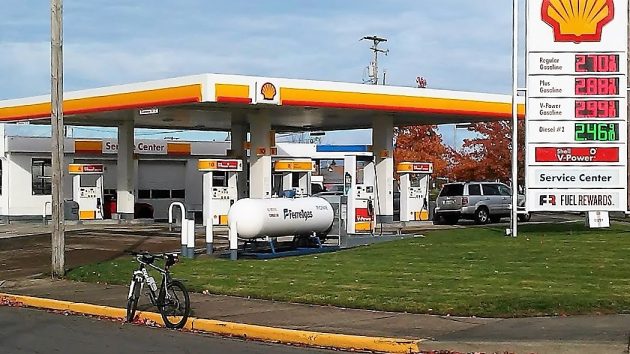 By Monday afternoon the station had been back in business for several hours.

Good news for customers of Courtesy Corner, the Shell station at the corner of Pacific Boulevard and Calapooia Street in Albany. After being closed for two months for the replacement of its underground tanks, the business reopened Monday at the crack of dawn.

When I went past there on an afternoon bike ride through town, Taylor Smith told me they had been open since 5:30 a.m.

His dad, Ron Smith, who has owned the station since 1962, told me later the project had replaced all the underground tanks, including one for non-ethanol gas, and installed all new pumps, among other things.

Construction on the project started Sept. 18 and was completed almost exactly two months later. Now, Smith the father said, the place is “state of the art.” (hh)