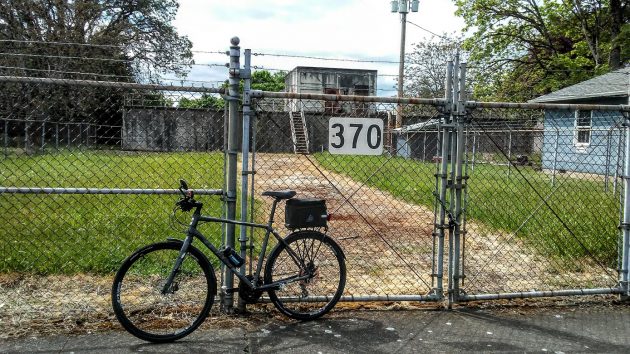 The grass looked lush Friday on this surplus lot the city council agreed to sell.

Chances are this lot on Albany’s Southeast Burkhart Street will soon look different. The city council has voted to sell the property to two men who want to build attached housing units there.

The first of several photos very much like this one of 370 Burkhart St. S.E. appeared here in August 2015. A couple out for a walk had gone past there, wondered about that concrete bunker in the back, and asked me about it.

Several stories followed, mostly about the city’s attempts to get rid of the lot. The last one, this past Jan. 25, reported that Matthew Wadlington and Page Diemer, who had formed Burkhart Investments LLC, wanted to buy the property and build five or six attached dwellings on it. The council liked the idea and instructed the staff to work out a sale.

This Wednesday, following a public hearing at which no one from the public spoke, the council voted unanimously to sell them the lot for $4,000.

The county assessor values the lot at more than $60,000. The city’s low selling price is explained by the presence of that massive and long unused concrete water reservoir. Demolishing it has been estimated to cost more than $400,000, city officials said at one time.

Wadlington is with Civil West Engineering. Diemer owns Northcore Construction in Salem.  They said in January they might try to incorporate the concrete structure in their plans to put “affordable” housing on the lot.

Whether they find a way to do that, or if not, how the housing will fit on the odd-shaped lot, the public will see when the planned construction is complete. (hh)