Where bunker sits, dwellings are proposed 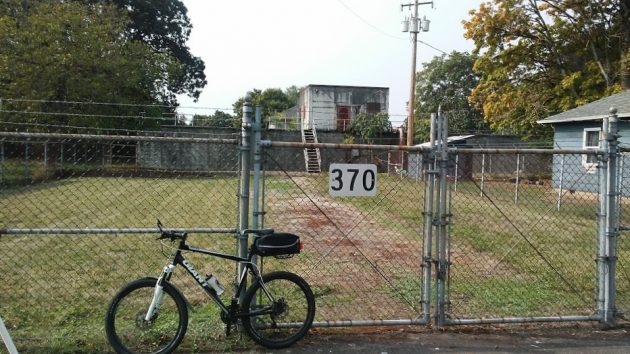 This city property on Burkhart Street, shown last October, may finally find a buyer and a new use.

The city of Albany has wanted to get rid of an unused reservoir it owns on Burkhart Street, but the astronomical cost of demolishing the heavily reinforced concrete structure scared would-be buyers away.  Now an engineer and a builder have come forward to give it a go.

During its work session Monday, the city council heard of a proposal by Matthew Wadlington and Page Diemer. They are interested in buying the lot at 370 Burkhart with the idea of building five or six attached dwellings there. They may want to try to demolish the reservoir or use it as part of their proposed construction.

Wadlington is area manager of Civil West Engineering with an office on Water Avenue. Diemer is the owner of Northcore Construction in Salem.

The council liked their idea. Now the city staff will work out a proposed price, possibly less than the lot’s market value of $68,000 estimated by the county assessor, and present a sale to the council for approval.

Wadlington and Diemer say they want to build “affordable housing” on the lot, zoned medium-density residential.  Councilor Bessie Johnson wanted to know what they meant by “affordable,” but there was no clear answer.

The reservoir was built in 1947 as part of the Albany water system. The city got it when it bought the system from Pacific Power & Light in 1985. It has been out of use since the 1990s and was disconnected about 20 years ago. It measures 60 by 100 feet and 20 feet tall, half below ground. The outside concrete walls are are least 18 inches thick with vertical and horizontal rebar.

Chris Bailey, director of public works operations, said a sale would benefit the city by putting the property back on the tax rolls, and the city would no longer have to maintain the lot.

There was no word on when the deal will come before the council for action. After it does, it will be interesting to see whether and how the buyers can incorporate that bunker-like mass of concrete in the housing they want to build. (hh)

In their virtual meeting, the council and others see how six housing units could fit on the Burkhart lot.

5 responses to “Where bunker sits, dwellings are proposed”