Council to get yard debris request 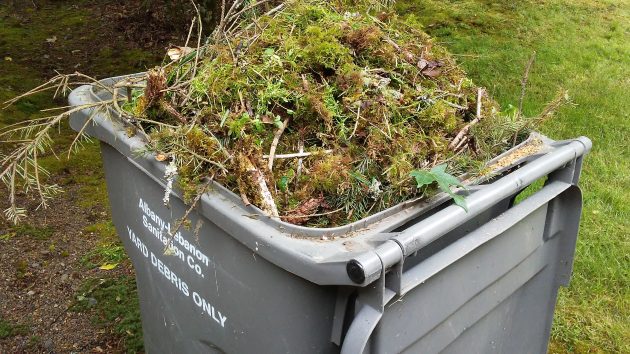 This yard debris cart, though overflowing, won’t be emptied for another week.

The question of starting weekly collections of yard waste will come up before the Albany City Council again this month. We’ll see whether carts overflowing with springtime clippings and storm debris prompt a different outcome now.

Last October, the council turned down, by a vote of 5-1, a proposal by Republic Services to pick up yard debris weekly instead of every other week, as it does in Albany now. The company wanted to add the service and charge $3 more per month. The council majority decided the added fee wasn’t worth it to customers who didn’t need the extra service.

But last month, Councilman Mike Sykes, serving his first term after being elected in November, asked for the issue to be revisited. In response, Republic plans to present a new proposal when the council meets for a work session on May 22.

Julie Jackson of Republic Services tells me the monthly fee increase for the weekly pickup this time would likely be more than the $3 proposed last year. The amount will be worked out by the time the council meets. The company had extra capacity last fall and now it doesn’t, she says, and providing weekly pickup will require buying a truck and hiring another driver. The extra charge, though, she adds, will be far less than the $9 a month already being paid by about 600 Republic customers in Albany for weekly pickups available as an option.

Republic provides weekly yard debris pickup for all its customers in Lebanon and Corvallis, along with its routine collections of trash and commingled waste for recycling. This allows food scraps to be added to the yard debris, which in turn allows some customers to reduce the size — and thus the fee — of their carts for trash.

Jackson says the biweekly pickup might help the city with storm water issues: Piles of autumn leaves that now get swept into the streets for Republic’s  leaf pickup also sometimes get washed into storm drains. If weekly pickup is available, maybe more residents will dispose of leaves in their carts instead. (hh)


15 responses to “Council to get yard debris request”